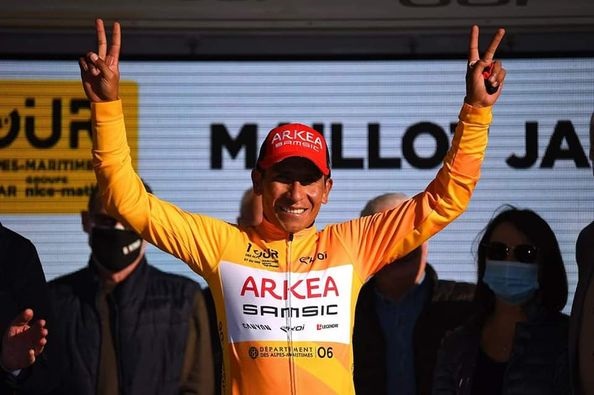 In a spectacular day, Nairo Quintana (Arke-Samsic) took victory in the last stage of the Tour des Alpes-Maritimes, played between Villefranche-sur-Mer and Blausasc over a 112.6-kilometre stretch of undulating terrain, and was left with the title of the French race.

The Colombian beetle, who won the Tour de La Provence earlier this month, took the win ahead of Frenchmen Guillaume Martin (Cofidis) and Alexis Vuilermoz (TotaEnergies), who arrived more than a minute late.

As for the general there were important changes. In this way, the boyacense runner took the general title. The Colombian climbed to the top of the podium, accompanied by Tim Wellens (Lotto Soudal), who was second, and Guillaume Martin (Cofidis), third.

The final day of the French test promised to be exciting. On the first climb of the day on the Col d’Eze, the race completely broke out. A leading group with fifteen cyclists managed to break away with Thibaut Pinot and Michael Storer from Groupama-FDJ), Lilian Calmejane (AG2R Citroën), Anthony Perez (Cofidis) and Roger Adrià (Kern Pharma) as protagonists.

In the peloton, the Lotto Soudal men worked tirelessly for their leader Tim Wellens, trying to control their rivals. Arkéa-Samsic had it clear and decided to leave all the work to the Belgian squad.

In the leading group, Pinot proved to have the strongest climbing legs and the Frenchman decided, after some good preparation work by his team-mate Storer, to go solo.

While the French rider was chasing the stage victory, behind Nairo Quintana attacked. The rider from Boyacá, stepped on the pedals, making Wellens suffer, who was trying to reduce the difference at his pace, knowing that there was still a long descent.

The leader of the Arkéa ranks knew how to make the most of his abilities to descend, quickly closing the gap with the Pinot leader. Quintana and the Frenchman soon found themselves at the head of the race. Wellens, in an attempt to save his leader’s jersey and managed to get into the chasing group, with Guillaume Martin and Storer, on the descent.

With twenty kilometers to go, Nairo and Pinot remained in the lead, but the lead over the chasing group (Wellens, Martín, Storer and Vuillermoz) was only twenty seconds. In the last meters of the descent, Nairo was left alone and began his march to victory.

Amongst the pursuers, the main focus was on Wellens, who had to do the dirty work for him. However, the leader of Lotto Soudal was not strong enough to close the gap on Nairo.

The Belgian’s forces were slowly exhausted and this undoubtedly gave Nairo wings, who overcame the Col de Nice without classifying (2.6 km at 4.8%), one minute ahead of Martin, whom he was already following Wellens’ group at 1:15.

The final stretch was a triumphant parade for the Colombian. In Blausasc he had plenty of time to make the gesture of victory and celebrate his second win so far this year.

Guillaume Martin crossed the finish line a minute and a half after the arrival of Nairo Quintana. Not long after, Vuillermoz managed to win the sprint for third place, ahead of Pinot and Wellens, who had to give up his yellow jersey as leader.