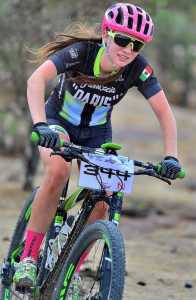 MEXICO. The mountain bike Natalia Torres wants to transcend in the MTB World Championship in Canada, where she is willing to fight with everything in search of a historic result for Mexico.

Torres Macouzet, originally from Michoacán and Pan-American medalist, mentioned that the work is done in the best way, proof of this was the silver medal obtained at the National Youth 2019 in Aguascalientes.

“After the Olympiad is the National that is one day and is the most important for us, by the national ranking. There I want to win to be in the World Cup, “said the competitor of the Junior category to the Mexican Cycling Federation.

The MTB Mountain National Championship is planned in Hidalgo on July 20 and 21, and the World Championship of the specialty in Quebec, Canada, from August 28 to September 1 next.

The cyclist said that in the National hopes to be crowned and continue with the preparation to have a good performance in the World Cup, “we want to reach the final and fight for a medal, I have had a good preparation and I want to have more.” In the national contest will take part in the short track tests, which is scheduled in the square of Ixmilquilpan; while the Downhill and the Cross Country in the EcoAlberto park. (20minutos.com.mx)