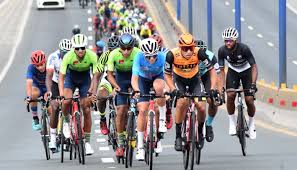 The Inteja-Imca rider repeated his triumph from the previous stage and raised his arms on the arrival of today’s stage Thursday.

In a circuit in Villa Altagracia, the Dominican rider broke Anthony Rodriguez from Asocipe-Moca and Geovanny García (Eda Cycling) in the final sprint, all three timed the same time from 3: 38.08.

The Individual General Classification is still led by Ismael Sánchez with a cumulative of 14: 40.43 and has 9 seconds of advantage over his closest pursuer Colin Patterson of the Voler Factory in the USA and 14 ‘over Clever Martínez of the Asodoci NY.

Damien Urcel (USCG Guadalupe) commands the Mountain with 29 units after winning today the first prize (category C) played at the stage at the height of the fifth round.

In the General by teams, the Aero Cycling team maintains the position of honor with an advantage of 7 minutes and 38 seconds over Inteja-Imca and 10:24 over Voler Factory USA