NETHERLANDS, FIRST CHAMPION OF THE WORLD OF MIXED TIME TRIAL BY RELAY 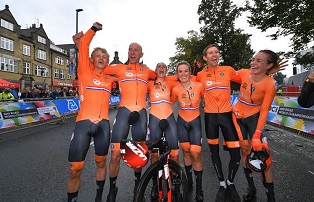 MADRID. The selection of Holland was proclaimed first world champion of mixed time trial by relay, a new modality with which the Yorkshire World Cups (Great Britain) were opened.

The Netherlands, with the male trio made up of Bauke Mollema, Koen Bouwman and Jos van Emdem, and the female one made up of Lucinda Brand, Riejanne Markus and Amy Pieters, won over a distance of 28 kilometers after marking the best times at all points of career reference.

The podium was completed by Germany and Great Britain, this leader until the last three, Germany, Italy and the Netherlands.