News!, Daniel Martínez second on the penultimate day and reaches the podium of Paris-Nice 2022 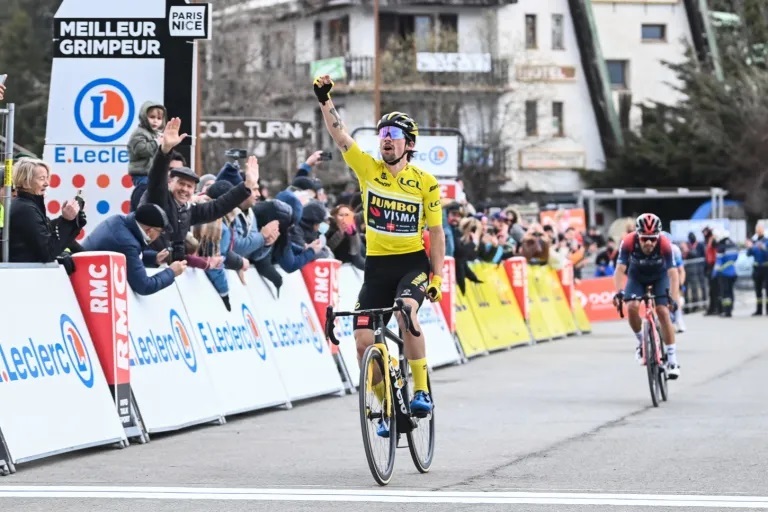 Primoz Roglic (Jumbo-Visma) won this Saturday with an incontestable victory in the 7th and penultimate stage of Paris-Nice 2022 after showing class, experience and mettle in the final 15-kilometre climb to the Col de Turini. The only one capable of keeping up with the pace and the wheel of the triple Vuelta a España champion throughout the climb was the Colombian Daniel Felipe Martínez (INEOS-Grenadiers) who entered second at the finish line and rose to third place on the general podium.

Nairo Quintana also stood out on the Col de Turini although on up to two occasions he had to regroup before the brutal pace of the Slovenian who dominates the sun race at pleasure. The boyacense even tried to win the stage on the tough final ramps but Roglic did not give rise to surprises and in the last 700 meters he launched a devastating attack that meant victory and consolidation of the leader’s yellow jersey one day from the final followed by Simon Yates (Bike Exchange) and Dani Martínez.

The former ski jumper continues to make it clear that his only rival in the world squad is currently running the Tirreno-Adriatico. Roglic more than responded to his favoritism in a memorable climb to the Col de Turini that saw the Slovenian in superlative level over his most powerful rivals, including the beetles Daniel Martínez and Nairo Quintana.

The day was faithful to the script and a large breakaway of fifteen runners left the peloton almost from the flag, led by the French Franck Bonnamour and the Danish former world champion, Mads Pedersen, the best placed in the general. The platoon dedicated itself to controlling the differences until 30K from the base of the pass, the INEOS and the Jumbo stepped on the accelerator.

The first ramps of the climb completely broke the group of pointers with the Austrian Gregor Muhlberger as the lone gladiator who survived the breakaway. From behind the battle of “roosters” was served and Dani Martínez accelerated to try to hurt the Slovenian who, knowing well the value of Soacha’s, went to his wheel to soon find himself at the head of the actions in Turini. From behind Simon Yates and Quintana did everything possible to fit the blow and with a second wind he was again with the Colombian-Slovenian duo.

The last kilometers were an exchange of sabers between four swordsmen, with a very active Quintana and trying to shake off the regular performance in the time trial that took him out of the fight for the podium, but the Slovenian never lowered his guard and in the last bars he He nailed the thrust to his three traveling companions with the change of more that he exhibits for these spring days.

Dani Martínez came in second displaying the usual class of him after an exuberant Roglic at the moment and reached third place on the podium to maintain the stellar line already exhibited in the Tour of the Algarve. Nairo also climbed up positions in the general classification and was fifth after a climb that saw him push at times more with heart than with legs to hold on to a Roglic who at the moment does not give his arm to twist.

The race will end this Sunday with a traditional leg-breaking day starting and finishing in Nice. Five mountain passes with the traditional Col d’Eze as the last judge before a swift descent to the finish line in the middle of “Paseo de los Ingleses” where a new owner of the sun shirt will be invested.