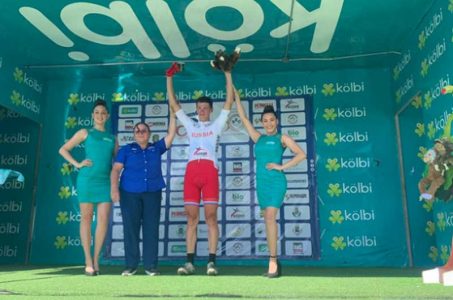 SAN JOSE. Russian rider Nicolai Zhurkin gives the second stage victory to the Russian National Team in the Tour of Costa Rica 2019 after winning the 7th fraction of 203 kilometers between Golfito and Pérez Zeledon ahead of the Guatemalan Julio Padilla (Deluxe Optics) and Alain Quispe (Selection of Peru).

While Daniel Bonilla held with just the leadership that for a large part of the journey endangered the Dutchman Reinier Honig (Procyclingstats), however, the work of Scotiabank Nestle Métrica Giant, the Canels Specialized and the Chicken Don José Multiple Corella brought him down in the last 25 kilometers for the goal.

The first flying goal of the day was for the Guatemalan Julio Padilla who would take the 5 points followed by the Peruvians Alain Quispe and Robinson Ruiz who would complete the 3 and 1 points in fight, while the second flying goal was for the Peruvian Alain Quispe, followed of his partner Robinson Ruiz and César Gárate who took 5, 3 and 1 points in this section.

The difference in the escape rose to 7 minutes thanks to the work of powerful riders like Reinier Honig, Julio Padilla, Alain Quispe, Victor Manakov who pedaled to complicate leader Daniel Bonilla.

The third flying goal was won by the Russian Viktor Manakov who was awarded the 5 points followed by the Peruvian Alain Quispe and the Dutchman Reinier Honig, who added 3 and 1 point respectively.

The difference of the pointers rose to more than 11 minutes with respect to the leader Daniel Bonilla, who for the moment lost the leader’s shirt, which was already for the Dutchman Reinier Honig.

From behind, leader Daniel Bonilla’s group was pulling hard with his teammate José Vega to reduce the difference in the race head, the Pollos don José team also took over to protect the interests of their leader Roberto Argüello.

José Vega was picked up by the work done while at the tip 25 kilometers from the goal the difference was 9 minutes, They entered to throw strongly the Canels Specialized and the selection of Ecuador.

Career head Viktor Manakov was launching an attack that at the moment took 1 minute apart from the other fugitives behind Julio Padilla, Alain Quispe, went out to cut Manakov’s lead, while Honig defended himself with what he had in the tank.

Honig floated with Sergio Arias and chased the 4 pointers that were integrated by Julio Padilla, Alain Quispe, the Russians Nikolai Zhurkin and Manakov in the absence of 10km for the goal, meanwhile the favorite lot regained time with the race head and Reinier Honig lost the lead.

Finally the stage was decided to the packaging where the Russian Nicolai Zhurkin beat the Guatemalan Julio Padilla and the Peruvian Alain Quispe who could not overcome the speed tip of the European cyclist, while Daniel Bonilla maintained the leadership that was largely taken from him. (crciclismo.com)