Nicolás Gómez, another gold for Colombia, now on the Sub 23 route 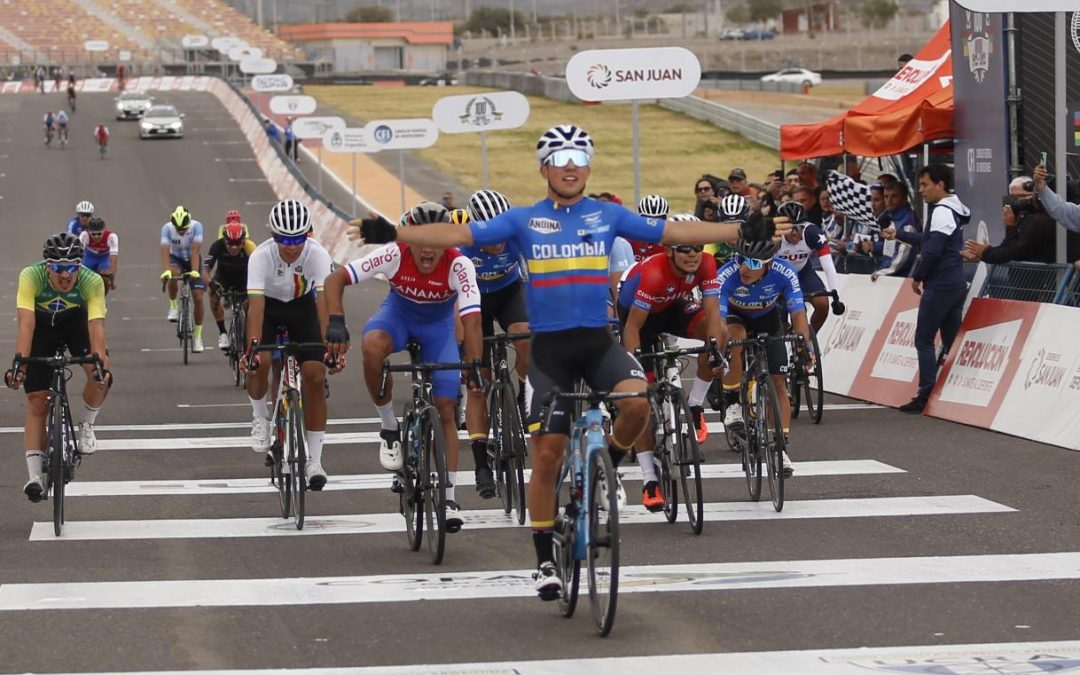 The sprinter from Antioquia, Nicolás Gómez, who has accumulated sprint definition victories in the Old Continent, prevailed in the definition in the platoon event of the Pan American Championship, Sub 23 category, which was played on Saturday afternoon in the province of San Juan.

After completing 143 kilometers, Nicolás Gómez stopped the clocks in 3h 21m 55s, beating Panamanian Bredio Ruiz and Trans-Andean Vicente Rojas, who waited too long for an attack during the course of the competition.

Controlling the marks and the pace of the race, the Colombian team left nothing to chance during the 140-kilometer journey so that the Pan-American Road Championship is defined by the sprint in the last kilometers within the demanding San Juan Villicum Circuit.

With a total of 56 riders, on Saturday afternoon the men’s event of the U23 platoon got under way, starting and finishing at the San Juan Villicum Circuit. The local representatives were joined by the experience of their peers from Colombia, Ecuador, Panama, Chile, Puerto Rico, Brazil, Bolivia, Paraguay, Uruguay, the Dominican Republic, the Cayman Islands and Peru, among which were several talents who already form ranks in teams of continental size in the European season.

The Argentine national team was at the forefront of the lot, suppressing the intentions of those who first started the leaks as soon as the competition was set in motion. The trans-Andean Claudio Álvarez (CHI) together with the Charrúa Facundo Ortiz (URU) sought the leading role on the Route 40 Highway. Control continued to be distributed among the trains of the different national casts, which set the pace in search of the west of San Juan.

The group remained compact in its passage through Chimbas, letting out one or another attempt, such as the appearances of David Ortiz (PAR) and Frailyn Bierd (DOM) who sought to make the cut. The Punta Negra Dam witnessed the passage of the majority group with the homogeneous transit of the ascent to the Caracoles. Ahead, Matías Pérez (ARG) and Nicolás Gómez (COL) showed the skills of climbers, but the parity in the effort did not allow them to fill the gap.

On the slide on the way to the Las Moras street roundabout, the peloton split between those who dominate pedaling downhill, while those who lost contact soon regrouped, chasing down the hill, after returning to the mountain in the area of the Ullúm perilago.

The Colombian U23 cast made the rotation at the top of the race, protecting the candidates with a high average, which sentenced the intentions of the attacks that could alter the order of the return to the Albardonero racetrack.

In the pass through the Embarcadero, Lenín Montenegro (ECU) took the reins and took the company of Pedro Figueiredo (BRA), Eduardo Moyata (BOL), Claudio Álvarez (CHI) and the Argentines Arián Etcheverry and Matías Pérez. The reaction of the platoon was not long in coming and canceled the actions of those who were in front, repeating the postcard of the first leg.

In the last third of the race, the team play was more noticeable. The carioca Víctor de Paula (BRA) was the lure that shook the group in the afternoon in the urban area of ​​Chimbas. The difference that touched half a minute, was a variant that was controlled because the formations had him in their sights, and on Route 40 the discount was imminent.

For Albardón, Lenín Montenegro (ECU) and De Paula (BRA) were the forwards who shuffled the chances stretching the bulk of the group that was holding in the fifty. Although there were twenty kilometers left to finish the test, they did not let up at the top, which forced the roll to be released ahead of time to take the packers to the sentencing line.

More than attentive, the casts that brought the majority of the number, such as Argentina, Venezuela, Colombia, Brazil and Uruguay, lined up at the entrance to the albardonero venue. The carioca De Paula, took shelter in the group, while the representative of Banco Guayaquil continued alone a few more kilometers.

Upon completing the first turn, the intensity increased, discarding those who were losing contact. Just a few meters separated Montenegro from the platoon and the counterattack was left to the Colombian team, who postulated Nicolás Gómez as his best sprinter.

Colombia put all the cards on the table, guarded by the Panamanians and Argentines, who equaled them in quantity. On the opposite stretch, the Pan-American CRI champion, Juan Manuel Barboza (COL) put together the final lunge, giving way to those who took flight to those who defend the colors of Team Colpack Ballan. In the last shake, the arm wrestling was in the heads-up with Panama, which reached the silver with Bredio Ruiz and Vicente Rojas, who gave the bronze to his native Chile.

Nicolás Gómez (Colombia) Champion: “My happiness is complete, I had a great team that gave me a lot of peace of mind and I only had to finish in the sprint. It has been a great experience to share with colleagues from Latin America. This was my first Pan American and I am leaving full of joy”.

Bredio Ruiz (Panama) Runner-up: “At first I didn’t believe it when I was in charge of packing, so it was a very nice feeling. We had a mishap before entering the circuit, but thank God we solved it. For me, the key to this result was to be inconspicuous, not to show much in the race.

I really liked the circuit, I loved the landscape of San Juan, but it was demanding. Now, to return to Panama and continue working.”

Vicente Rojas (Chile) Third: “Very happy, because there is a lot of work behind, we have been waiting for a long time to win something like this; this is too much for me. There was a lot of communication between the teammates who worked hard. The track was quite hard, but luckily there was no wind. I saw that no one was running away, so I saved myself for last, since I am a climber; In fact, I thought I could escape earlier, but they wouldn’t let me.