Norwegian Tobias Foss gives the first surprise of the World Cup: gold in the time trial 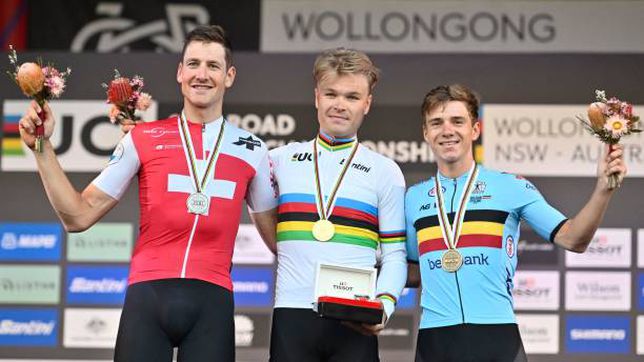 Filippo Ganna, Remco Evenepoel, Tadej Pogacar, Stefan Küng, Rémi Cavagna, Yves Lampaert… Many names, and very good ones, who made up a truly luxurious poster for the time trial at the Wollongong World Championship; hence the stratospheric level reached by Tobias Foss (25 years old) to win gold in this event for the first time in his professional career. Küng, silver, and Evenepoel, bronze, accompanied him on the podium.

The Norwegian, who did not appear in the favorite pools, gave the first surprise of these championships and, incidentally, made history for his country, since Norway had never won a metal in the world test against the clock.

Foss went out on the 34.2 kilometer course just at the moment when the wind did the least damage, and he took advantage of it to leave a mark of 40:02 that could not be surpassed by the greatest specialists in the discipline. Such was the surprise that, when the Jumbo-Visma runner crossed the finish line, Evenepoel could not hide his astonished face.

The first benchmark time came in the second block of runners, when Bisseger was the first to drop under 41 minutes. But Foss, who went from less to more in the test, ended up full of strength to set the best time.

His biggest threat was another Swiss, Küng, who posted the best time in the two intermediate sets. He collapsed in the final 10 kilometers, in which he wasted the 12 seconds he had ahead of Foss.

Behind, Evenepoel had to settle for bronze, while Pogacar (6th) and Ganna defending the title (7th) were below the expected level, always far from medals. The best representative of America was the American Magnus Sheffield, who finished in 17th place with a time of 41:46, more than a minute behind the winner.

The moment his victory was confirmed, Foss couldn’t hold back his tears. “I feel like I’m in a dream, it seems like this isn’t happening, I don’t believe it. My legs felt good, coming from Canada I knew I was in good shape, but this is more than I could ever dream of. I have to try to enjoy it, but first I have to realize that it has happened.

“I’m not the most confident boy in the world, when I crossed the finish line I didn’t believe it and I didn’t want to believe it until it was over. I felt that he had given everything he had, the best of me and that he couldn’t have done better, ”explained the new world champion, very emotional.

“This is incredible. I think there was no time to rest in the test and we had to be very technical, pushing through the corners. You had to be tough when the terrain was higher up. If it had been top-10, I would have left very satisfied. Wearing the rainbow jersey is going to be very special, I’m going to try to honor it and of course I’m going to enjoy it as much as I can.”

The young Nordic promise, after three discreet seasons on the World Tour in which she was unable to continue the expectations generated by her victory in the Tour del Porvenir, is already taking flight.