NUMEROUS VOICES OF THE PELOTON CONGRATULATED THE TEAM MEDELLÍN, NUMBER 1 ON THE RANKING AMERICA TOUR 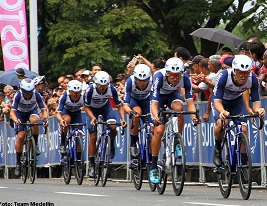 BOGOTÁ. 2019 has been the best year for Team Medellín since its creation: 17 participations in high-level events, 9 of them international, with 4 titles outside the country and 18 stage victories, among other results, ratify why the squad of the Antioquia capital finished in number one of the América Tour ranking of the International Cycling Union (UCI).

This motivated the joy of athletes, cyclists and the ICU itself, who sent congratulatory messages to the team. “I think it is very important for Colombia that a team has won this classification; they are working very well, bringing new cyclists to the World Tour and giving important results for the city,” said Tour de France champion Egan Bernal ( Ineos).

For his part, the cyclist Bogotano Esteban Chaves (Mitchelton-Scott) said that “that is the reward for so much effort and so much work they have had through these years.”

2019 was the year of double consecration in the country; retention of the title of the Tour of Colombia with Fabio Duarte and for the first time as a team the RCN Classic and the fourth for Oscar Sevilla were achieved.

Like them, many other athletes have sent their greetings to the team: Santiago Botero, Camilo Villegas, Sergio Luis Henao and the International Cycling Union itself through its president David Lappartient, by letter, congratulated the team.

From Team Medellín they have sent “a greeting of gratitude to the city, our sponsors and followers. We hope to continue contributing so that cycling continues to grow and generate social transformation through sport.” (EFE)