PAN AMERICANS 2019: THE GREEN COAST WILL BE CLOSED FROM MORNING BY ROAD CYCLING 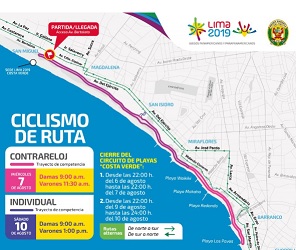 LIMA. This Wednesday, August 7 and Saturday, August 10, the Costa Verde beach circuit will be the scene of two competitions that will bring together 91 of the best cyclists on the continent in the framework of the Lima 2019 Pan American Games.

This is the Time Trial and Individual Road Cycling tests, for which the closure of the Costa Verde will be executed from tomorrow, from the San Miguel district to the Chorrillos district.

The first vehicle restriction will be tomorrow at 9:00 a.m. because the Organizing Committee of the Pan American Games and the National Police of Peru will carry out the route recognition. The restriction will apply until 2:00 p.m.

For the development of the Time Trial, the Costa Verde will be closed to vehicular traffic, starting at 10:01 p.m. from Tuesday, August 6 until 10:00 p.m. Wednesday, August 7.

The competition will start at 9 a.m. Wednesday with 20 female cyclists. The starting and arrival point will be the ascent of Bertolotto Avenue.

Two and a half hours later, at 11:30 a.m., the men – 21 athletes – will start the same route as the women’s competition. In the case of women, they will travel 18.5 kilometers and, in the modality of men, they will cycle 37 kilometers, going around the circuit indicated.

The Individual Route test will begin at 9:00 a.m. with the female category, in which 33 competitors will give 6 laps (79.8 kilometers) to the circuit. The starting and arrival point will be at the Costa Verde headquarters in San Miguel to Pampilla beach in Miraflores, where they will turn “U” for the return to the San Martín climb (San Isidro, height of the LUM museum), continue along the Army Avenue, turning another “U” turn through said artery, and return to the beach circuit to the point of arrival.

This test is a collective start, in which the athletes leave in platoon and the first cyclist to cross the finish line will be the winner. At 1:00 p.m., four hours later, the competition of 44 male athletes will begin, who will take 13 laps (172.9 kilometers) to the same circuit.

In both tests, the public will be able to encourage athletes during the tour, as well as witness world-class athletes, among which are the 2016 silver medalist in chase, Chloe Dygert, and the Pan American Road Cycling champion Individual 2018, the Cuban Arlenis Sierra.

The Peruvian team will consist of 11 athletes who will participate in both events. (elcomercio.pe)