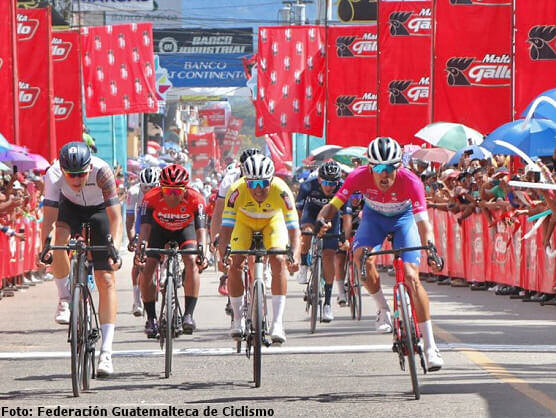 The Panamanian Franklin Archibold surpassed himself, by winning the second stage of the 61 Tour of Guatemala, disputed over 132.5 kilometers, with which he improved the second place of the opening day, although the Colombian Robinson Chalapud preserved the leader’s jersey of the contest.

The Panamanian cyclist of the Panama is Culture and Values ​​team, is one of the favorites to fight until the end for the most important title of the fair (he is three seconds behind the leader), hence he was being watched throughout the journey this Monday between Chatun Esquipulas and Monjas, belonging to the department of Jalapa.

With a time of 3 hours, 20 minutes and 38 seconds, Archibold won the sprint at the arrival in Monjas ahead of the Dutchman Nick Van der Meer (Westland Wil Vooruit) and the leader of the race, the Colombian Robinson Chalapud (Banco Guayaquil). ), second and third respectively.

According to several press reports, the Mexican Jose Alfredo Santoyo (Sel. de México) rode outstandingly and alone for a good part of the journey, until the peloton finished with their options in the final part of the stage. Then the Guatemalan Esdras Morales (Hino-One-La Red-Tigo-Suzuki) tried it, but he too was caught by the peloton.

In this second stage, some falls were recorded at the beginning of the competition, and among the affected cyclists were the Guatemalans Alex Pichiyá from Opticas Deluxe and Dorian Monterroso from Decorabaños.

Robinson Chalapud, who took the lead this Sunday by winning the first stage, remained at the top of the general classification of the Guatemalan round. The Vuelta a Guatemala will continue this Tuesday with the dispute of its third stage, with an undulating profile and 108 kilometers between El Progreso and Fraijanes.

Classification of the 2nd stage:

2. Franklin Archibold (PAN/Panama is culture and values) at 0:03