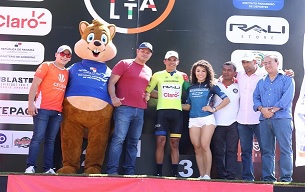 CITY OF PANAMA. The Panamanian domain lasted one more day in the Tour of Chiriqui thanks to Franklin Archibold. The Team Ininco rider took the honors in the fourth stage, a victory that allowed him to assume the overall leadership of the competition.

Archibold timed 2 hours, 21 minutes and 37 seconds to beat Fabio Avendaño, of the Soacha team from Colombia, who entered 2 minutes, 37 seconds.

The also Panamanian Carlos Samudio, leader of the previous stage, was third.

The test included a closed circuit of 10 laps, with three flying goals, won in their order by Julio Padilla (Optics Deluxe Guatemala) and the last two by Juan Gamero, of the National Team of Peru.

Returning to the general classification, Archibold has 1 minute, 17 seconds of advantage over Samudio and 1 minute, 40 seconds over also the channel Jorge Castelblanco.

Archibold is also the national leader, U23 leader and points leader. (panamerica.com.pa)