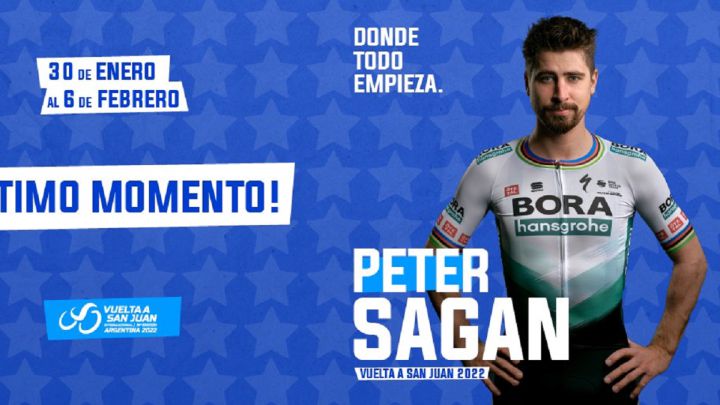 The stellar Slovakian cyclist Peter Sagan, three times world champion, confirmed that his 2022 sports season will begin in the Tour of San Juan, Argentina, as it happens for the third time, although he has not been able to achieve victories in it and his best result it is twice subtitling of stages.

“I’m still young and I want to show more things,” were the words that Peter Sagan said to the Cyclingnews portal in one of his last interviews in which he told of his desire to fine-tune his set-up for greater challenges in the 2022 season.

At the Vuelta a San Juan (January 30 to February 6), one of the first stage races of the year where the Slovak will debut the colors of his new team after leaving Bora-Hansgrohe: TotalEnergies.

The organization of the Argentine test confirmed in the last hours the presence of Sagan, which will mean his third participation in the Vuelta a San Juan (2019, 2020 and 2022). Curiously, the universal trimonarch will try to break the dynamics that has haunted him in his previous participations, since he has never managed to win a stage.

He was once second in 2019 and again second last year, so if he climbed to the top of the podium he would win in one of the few events where he has competed and where to date he has not won.

At the moment, for the fifth edition of the Tour of San Juan (this year it was not celebrated due to the COVID-19 pandemic) only the presence of Sagan is confirmed, but like the rest of previous years, it is to be expected that more stars from the squad participate to start their respective seasons.

In recent years, runners such as Julian Alaphilippe, Filippo Ganna and Remco Evenepoel, current champion, have been seen in Argentina.