Primoz Roglič wins Paris-Nice; and Daniel Martínez gets on the podium 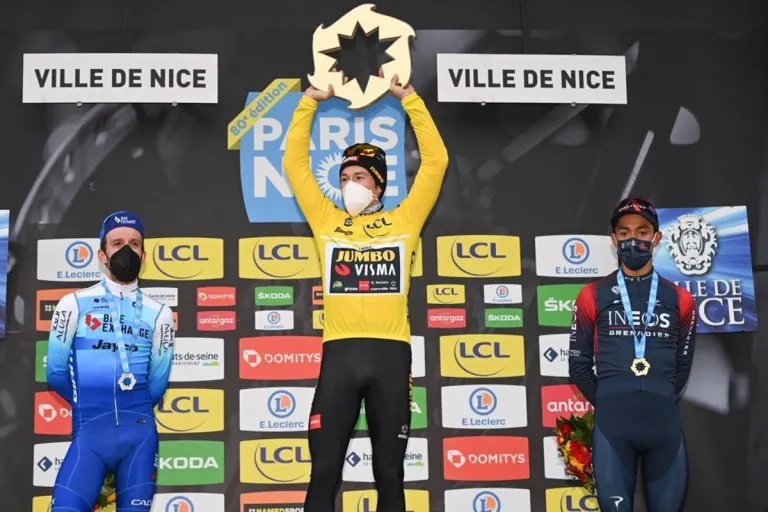 In a dramatic finish, Simon Yates (BikeExchange-Jayco) took victory in the eighth and final stage of the Paris-Nice 2022, developed over 115.6 kilometers around Nice, with a traditional medium mountain circuit. The British made Primoz Roglic (Jumbo-Visma) suffer, who was finally able to win the French round.

The leader of the classification was able to count on the great work of his magnificent teammate Wout van Aert, who managed to take his Slovenian teammate on the wheel in the final kilometers and thus save the situation to become champion. The Colombian Daniel Felipe Martínez (Ineos Grenadiers) managed to defend his third place and got on the podium.

The last day he left Nice with a very decimated platoon. Shortly before the start, David Gaudu, David De la Cruz, Matteo Jorgenson, Matthew Holmes and Luke Rowe, among others, decided to drop out of the race. The first bars of the demanding fraction were vertiginous with the multiple attacks to form the breakaway.

On the Côte de Levens, the first climb of the day, Spanish champion Omar Fraile (Ineos Grenadiers) was very active, as was Frenchman Quinten Pacher (Groupama FDJ). In the intermediate kilometers between the Côte de Levens and the Côte de Châteauneuf, the peloton remained guarded by the Jumbo-Visma with four men: Wout Van Aert, Rohan Dennis, Steven Kruijswijk and Christophe Laporte.

On the Côte de Peille, 45 kilometers from the finish line, Omar Fraile set the pace at the service of his leaders Martínez and Adam Yates. Then it was just a matter of waiting for an acceleration from one of the Ineos men. A new attack by Colombian Daniel Felipe Martínez ended up exploding the group of favorites.

The leader of the general classification, Quintana, Simon Yates and Van Aert followed Martínez’s lead. Riders like Jack Haig, Adam Yates, João Almeida and Guillaume Martin couldn’t keep up with the beetle’s pace. The pursuers were losing more and more ground and it seemed that we started the ascent to Col d’Èze with five fugitives, however a puncture damaged Daniel Felipe’s plans.

With thirty kilometers to go, Martínez punctured. The Colombian was assisted by the neutral car, but was suddenly faced with a thirty-second deficit and was swallowed up by the chasing pack before the Col d’Èze. Van Aert, Roglič, Quintana and Yates, meanwhile, had to deal with the first steep ramps of the final climb. It was Quintana’s turn to attack, who tried to accelerate twice, but the boyacense could not get rid of Roglič, Yates and Van Aert.

In the final stretch, Quintana, Roglič Van Aert had no answer to an attack by Yates, who quickly moved away from his opponents, so that the lead was suddenly on edge. The difference between the Slovenian and the Briton was just 47 seconds in favor of Roglič before the start of the final stage. The wearer of the yellow jersey suddenly turned pale, but he was still able to count on his luxury teammate, Van Aert, who was crucial to the outcome of the race. The Belgian champion found second wind from him and brought his Slovenian teammate to his wheel.

Roglič, however, had several problems following Van Aert, who managed to keep the gap with Yates within limits. The BikeExchange-Jayco rider was first around the top of the Col d’Èze and started the flatter kilometers to Nice with a 25-second lead.