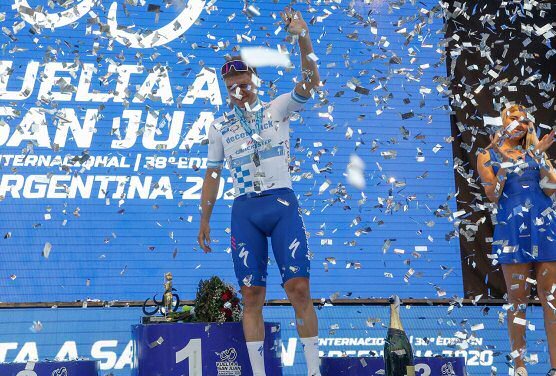 The Belgian Remco Evenepoel (Deceuninck Quick Step) was consecrated this Sunday champion of the Tour of San Juan, which was played in the province of San Juan (west), while the seventh and final stage was in the hands of the Colombian Fernando Gaviria (UAE Emirates team).

Evenepoel sealed without problems a domain that he had consolidated when he conquered in a great way the time trial stage with an outstanding time, which allowed him to take a reassuring advantage over his pursuers

Evenepoel, 20, is the European individual time trial champion (CRI) and is considered one of the great promises of this sport, as he quickly jumped from the junior category to the World Tour by joining the Deceuninck-Quick Step, and It already has seven wins, including the Tour of Belgium.

Interestingly, before devoting himself completely to cycling, Evenepoel was a promising football player, with a past in the youth divisions of Anderlecht and PSV Eindhoven, and the selected U-15 and U-16 of Belgium, where he served as a central midfielder.

“It was a great start to the season to win here, I felt great in the time trial and also in the (fifth) stage of the Colorado, which helped me to keep the leader’s jersey. All the team’s work was very good. I felt a winner after the time trial, only when I arrived, because anything can happen in a race, “said the champion.

The Belgian sprinter became the youngest winner of the San Juan Tour and continues in the winners of the Argentine competition to the Colombian Winner Anacona, winner in 2019, and also to the Spanish Oscar Sevilla, winner in the 2018 season.

On his side, Gaviria won in the final sprint to the Slovak Peter Sagan, and thus celebrated his third stage victory in this Tour, while the Colombian Álvaro Hodeg completed the podium, and behind the Italian Manuel Belletti, the French Hugo Hofstetter and Rudy Barbier.

“It was a beautiful stage to win, the team worked perfectly and it was very important for these three victories,” said Gaviria, who celebrated his eleventh stage victory on Argentine soil and the 43rd of his career.