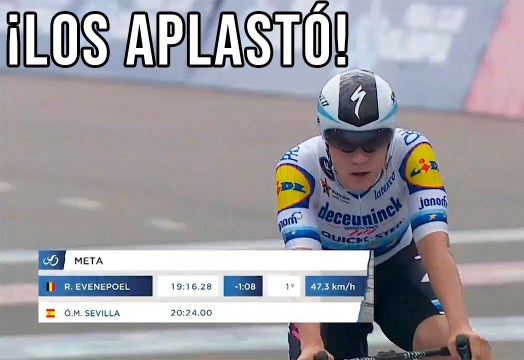 Remco Evenepoel, with just 20 years old, not only raises tremendous expectations, but the Belgian is responsible for fulfilling one by one.

This was done in the Contra Watch of the Tour of San Juan, in the third stage, in which the (Deceuninck Quick Step) took the victory in a 15.2 km course with a demanding finish in Punta Negra.

During the first section, more flat, it was a shot that marked the best time at the intermediate point, an advantage that he managed to administer in the second part, with some ramps that he saved giving an image of tremendous strength. Evenepoel, the best young man of the previous edition of the race, is wearing the general leader’s jersey.

He arrived in San Juan with all the lights pointing at him, but with the umbrella of being accompanied by the team leader, the Frenchman Julian Alaphilippe.

However, some stomach problems made him unable to take the exit on Tuesday at the clock and fell full responsibility for the Belgian prodigy. No problem. He premiered his European time trial champion jersey and from the first kilometers made it clear that the victory was his.

While a storm was rising at the finish line, the Belgian watched as no rival approached him.

Second was the world bronze Filippo Ganna, an Ineos cyclist who participates in San Juan with the Italian national team, who stayed at 32 “, while veteran Oscar Sevilla (Medellín) was third, more than a minute away (1:08 ). Evenepoel is placed as leader of the general with four stages missing.

This Wednesday is the fourth day with arrival in Valle Fertil, although it will be Friday when the great final exam in Alto del Colorado arrives.

In principle, land for climbers more specialists than the young Belgian, although no one is able to set limits