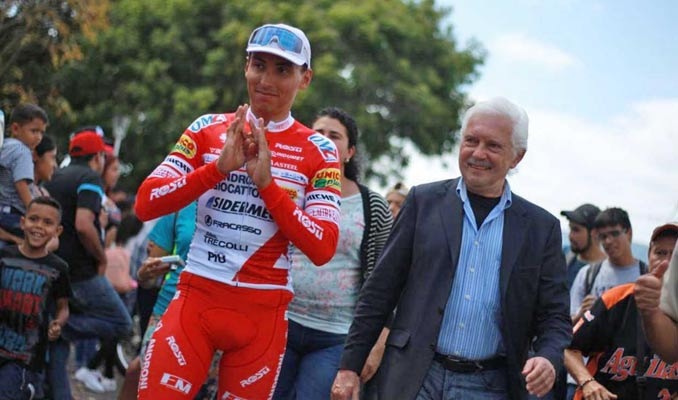 Jhonatan Restrepo of Androni Giocattoli Sidermec, won the Rubio population, winning the third stage of the Vuelta al Táchira, with a time of 3h 28’57 ”and Jhonathan Salinas del Deportivo Táchira Supér Ahorro is the new leader of the competition .

A very busy circuit in the city of Rubio, containing 13 beltways that were used by the fastest runners, who placed emotion from start to finish. From the beginning of the circuit, the Jackson Rodríguez de Moy´s / JHS Grupo, Juan Hoyos of the Team Gesprom Colombia and Isaac Yaguaro of the CicloCorse Foundation, moved the competition by separating from the lot placing a difference of 5’06 ”and thus starring A quick escape.

Meanwhile in the lot where the leader’s team kept working; the Italian Luca Pacioni of Androni Giocattoli, remained calm and escorted by his teammates, who worked ahead of the group.

Each of the beltways was faster than the previous one and the speed level imposed by the fleeing triplet was 40 kilometers per hour, revealing the intention of Rodríguez, Yaguaro and Hoyos to achieve victory on the third round of Vuelta to Tachira.

Already, in the last ring roads there were several leaks and the competition leader Luca Pacioni could not maintain the high rate of competition imposed by the fleeing cyclists losing the lead, as well as the three men who initially moved away from the platoon.

That is where Deportivo Táchira attacks and it is Jhonathan Salinas who, together with his partner Roniel Campos and the pedestrians Franklin Chacón of the Government of Miranda, Kevin Rivera and Jhonatan Restrepo of Androni Giocattoli, starred in a film finale at the end of the third stage.

In this way, Jhonathan Salinas of Deportivo Táchira Super Ahorro, snatches the leader’s jersey from Pacioni, but in the general classification the rider Jhonatan Restrepo occupies the second place and shares the lead with Salinas having the same time of 10h 16’15 ” This Wednesday, January 15, the Andean round will fulfill the fourth stage, a strong day, where it will present ascent terrain with two mountain awards and four sprints, between the towns of Coloncito, La Tendida, La Fría, Seboruco and La Grita, with 145.1 kilometers of travel.

ALL RESULTS DETAILED AT: https://www.copaci.org/event/america-tour-vuelta-al-tachira/