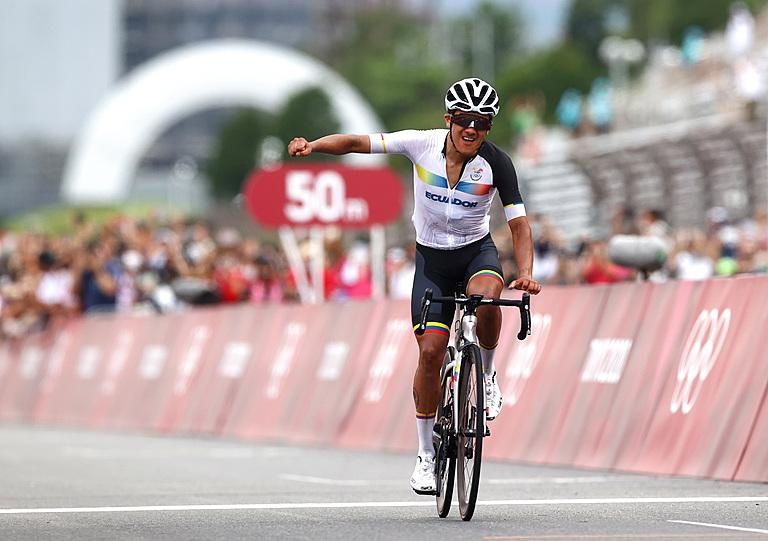 Tokyo.- The Ecuadorian cyclist Richard Carapaz entered the history of his country by winning the gold medal this Saturday, July 24, after crossing the finish line alone of the road test of the XXXII Tokyo 2020 Olympic Games, run over 234 kilometers with five mountain passes.

“It is something incredible, for my country it is something very important, a gold that will be remembered forever, being part of that small group of athletes that has been able to achieve it is something very great, which will remain in my history. country, of my life, “said the recently proclaimed Olympic champion on the track of the Fuji International Circuit, where the test ended.

Carapaz, who equaled the gold achieved by the Ecuadorian Jefferson Pérez in the 50-kilometer march of the 1996 Atlanta Games, finished ahead of the Belgian Wout van Aert and the Tour de France winner, the Slovenian Tadej Pogacar, who completed the podium after a disputed sprint.

The Carchi native had already written another page for the sport last Sunday, when he finished third in the Tour de France, being the twentieth cyclist to make the podium in the three great stage tours (first in the Giro-2019 and second in the Return-2020).

In fact, Ecuador only had two Olympic medals so far, both won by Jefferson Pérez, who also won silver in Beijing 2008.

It’s the best time of my life

The Olympic champion, Richard Carapaz feels that he is in a great moment, “the best moment of my life,” said the ‘Locomotora del Carchi’ at a press conference, after proclaiming himself Olympic road cycling champion at the Tokyo Olympics .

“It has cost me a lot of work, effort and sacrifice, but everything has been worth it. It’s the best moment of my life ”, said the only cyclist to have reached the podium in the three great Tours: Giro d’Italia, Vuelta a España and Tour de France and now in the Olympic Games.

“We went to the Tour de Franscia with the desire to make the podium, and we succeeded. We came here and we had the feeling that we could achieve something ”, he expressed very excited. He said he “couldn’t believe it” when he entered the finish line, at the Fuji International Speedway, almost alone.

And he feels that he cannot believe it, because he “is the second Ecuadorian to achieve a gold medal for the country, after Jefferson Pérez.” Richard Caparaz, the gold carchense, was moved when he received the medal from him and listened to the National Anthem of Ecuador. A tear ran down his cheek as he looked totally emotional.

The Carchense asked to sleep in the Tokyo Olympic Village and not in the sub-headquarters, at the exit of the Japanese capital, where all the cyclists gathered. He wants to rest and hang out with the other athletes who are members of the tricolor delegation.