Richard Carapaz, leader of Ineos in the Giro d’Italia 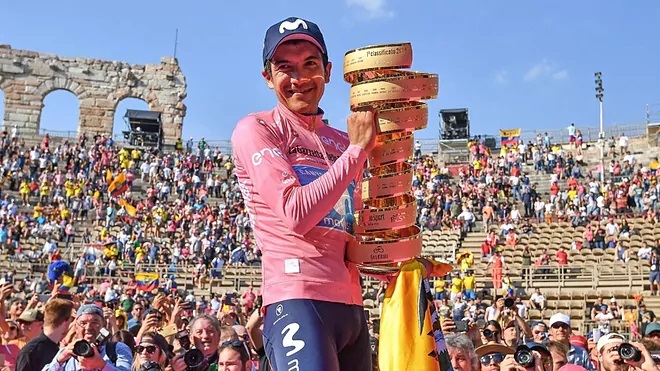 Imitating 2019 becomes the goal of one of the best cyclists in the world. Richard Carapaz, an Ecuadorian runner from Ineos Grenadiers, has been selected as the leader of the British squad for the 2022 Giro d’Italia. A race that he won in the 2019 edition and that marked his definitive leap to stardom as a cyclist. Three courses later he will face her as one of the top favorites.

Ineos Sports Director, Matteo Tosatto, announced that the Ecuadorian climber will be the team leader. He will be accompanied by the 2020 champion, Tao Geoghegan Hart, and one of the best cyclists in the world, the versatile and talented Tom Pidcock. In addition, it is possible to see sprinter Elia Viviani at the start of the race.

Thus, Ineos is clarifying its calendar for 2022. On the one hand, it should be known who would be the leader in the Tour and it seems that this responsibility will fall on Egan Bernal and the recently renewed Geraint Thomas. Carapaz, who was on the podium in Paris with Pogacar and Vingegaard last year, changes his goal, although he can turn if the road determines it.

The Olympic champion en route at the Tokyo 2020 Games is a full guarantee. His triumphs in the Giro, his climbing ability and his attitude in the race have always squared with the type of race that the Italian round is by type of stages, ambushes and needs of the teams. Before the Ecuadorian it is certain that Miguel Ángel López will appear, for example, who has also focused his objective on the Giro and who will seek to vindicate himself after his departure from Movistar.

A possible victory for Carapaz would take his record to another level. Olympic gold, podium in the big three and continues to chain courses as one of the best voltomaniacs on the planet. A perfect response to the dominance that the two great Slovenian dominators, Primoz Roglic and Tadej Pogacar, want to exercise.