Rigoberto Urán remains second in the Tour de France, despite the rain 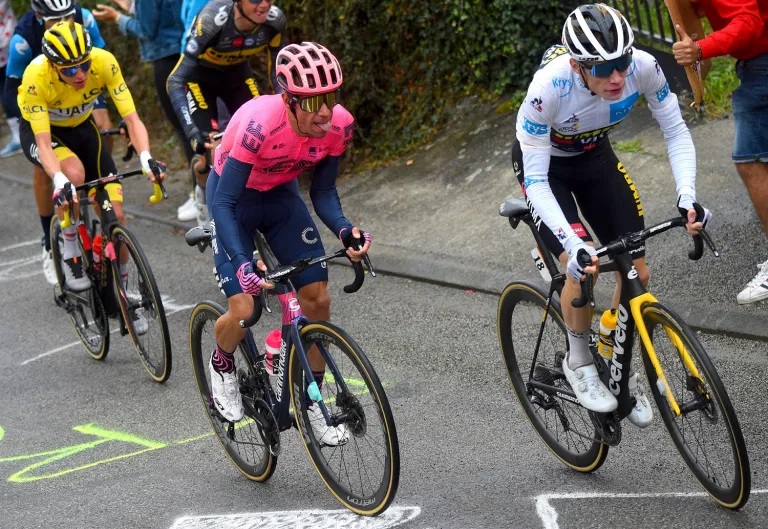 In the rain and after making part of the day’s getaway, Austrian rider Patrick Konrad (Bora Hansgrohe) took a great solo victory on stage sixteen of the Tour de France, where Colombian Rigoberto Urán (EF Education Nippo) he maintained his second place in the individual overall behind the Slovenian Tadej Pogacar (UAE Team Emirates).

Konrad, who launched himself for the victory 36 kilometers from the arrival, wore a remarkable victory this Tuesday on the day that traveled 169 kilometers between El Pas de la Casa and Saint-Gaudens. The Austrian who reached the finish line 42 seconds behind his fellow adventurers Sonny Colbrelli (Bahrain Victorious), and Michael Matthews (BikeExchange).

The Colombian Miguel Ángel López (Movistar Team) was one of the men who was most incisive to the attack with the intention of being part of the day’s break, like Nairo Quintana (Arkea Samsic) and Sergio Higuita (EF Education Nippo) who sought make a difference without finding fortune, beyond remaining in the main group until the final acceleration proposed by Cofidis.

The breakdown was so chaotic that until the first 90 kilometers of the race the group was running very small and neutralizing any offensive action. On the climb to Col de la Core and after an intense battle, it was possible to make up the getaway of the day, initially with three men, who ultimately did not reach the podium.

The main group, always commanded by the men of UAE Team Emirates, rolled at a moderate pace and became increasingly crowded, in such a way that the general and intermediate classifications did not suffer variations. Tadej Pogaaar who was very attentive to cuts and the break is still leading, preceded by Rigoberto Urán (EF Education Nippo) and Jonas Vingegaard (Jumbo Visma) who retain the second and third position, while the Ecuadorian Richard Carapaz is fourth to one second difference from the third step.

Although a great battle for the leadership of the mountain was expected, Wout Poels and his main contenders Michael Woods and Nairo Quintana, decided to save energy for the two demanding days of this Wednesday and Thursday where the wearer of the jersey will be defined. red ‘seeds’.

This Wednesday stage 17 of the Tour will depart from Muret and will cover 178 kilometers of distance. Day with passage through three mountain passes, two of the first; the Col de Peyresourde (13.2 km) and later the Col de Val Louron-Azet (7.4 km), before embarking on the final adventure to the Col du Portet, an out-of-category climb with an extension of 16 km.