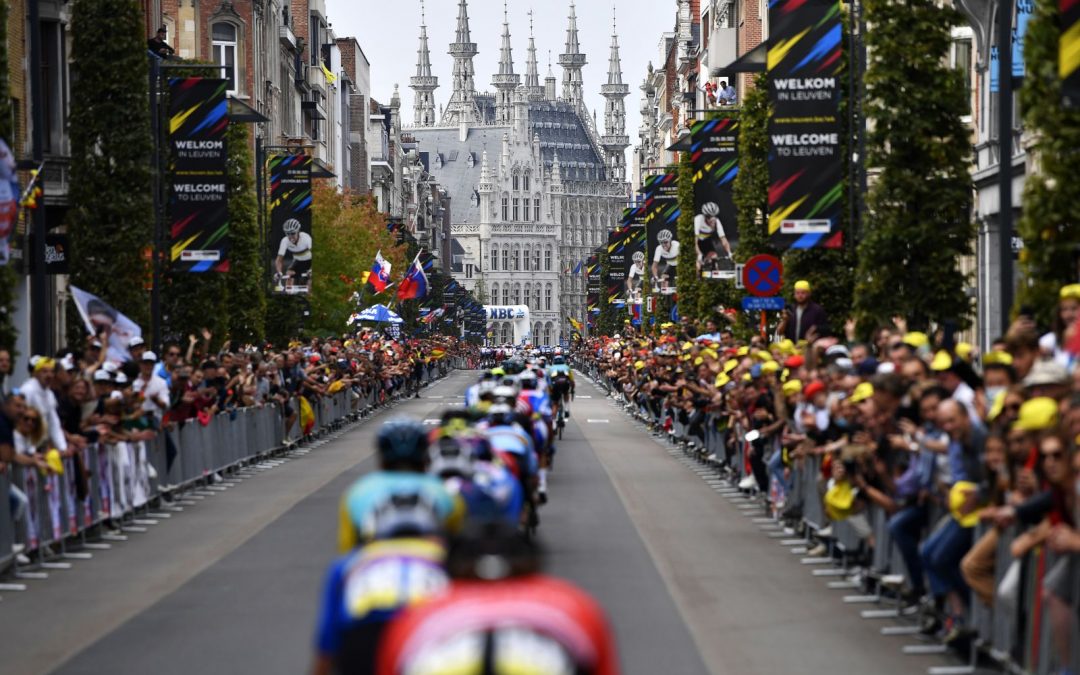 75 nations were represented at the 2021 UCI Road World Championships in Flanders.

54.355 km / h was Filippo Ganna’s average speed on the 43.3 km individual time trial course in Flanders. He was fast enough to successfully defend his rainbow jersey a year after becoming the first Italian to win the individual time trial at the UCI Road World Championships in Imola, Italy.

2 consecutive UCI world titles also for Frenchman Julian Alaphilippe, in the Elite men’s road race, making him the seventh driver and the first Frenchman to win two years in a row.

162 women from 48 countries lined up for the Elite Women’s road race in Flanders, but none could match Italy’s Elisa Balsamo, who achieved a sprint victory ahead of Marianne Vos (NED) and Katarzyna Niewiadoma (POL).

1st medal in the UCI World Road Championships for Eritrea thanks to former UCI World Cycling Center trainee Biniam Girmay, who crossed the finish line of the men’s Under 23 road race in Leuven two seconds behind winner Filippo Baroncini (Italy) to claim the silver. “I am very proud of what I have just achieved, this silver medal means a lot for Eritrea, and also for Africa,” Girmay said afterward.

108 million people were reached through UCI digital platforms during the 2021 UCI Road World Championships. The event captured the imagination of fans around the world with 52,000 new followers, 26 million views of video and 1.2 million visits to the UCI website.

1 min 15 seconds was Anna Kiesenhofer’s margin of victory in the women’s road race at the Tokyo Olympics. The Austrian surprised both herself and her opponents with her dominating performance on the 137km route with 2,692m elevation gain.

1st place for the Ecuadorian Richard Carapaz in the men’s road race in Tokyo. This first Olympic cycling gold for Ecuador came just a week after Carapaz became the first Ecuadorian to get on the Tour de France podium (3rd).

1 min 01.39 seconds was the great margin of victory for the Slovenian Primož Roglič over the Dutch Tom Dumoulin in the men’s Olympic time trial after completing two laps on the 22.1 km course.

38 years old and still on top of the game. The Dutch Annemiek van Vleuten won two medals at the Tokyo 2020 Olympic Games (silver in the road race and gold in the individual time trial), as well as the overall ranking of the UCI Women’s World Tour, for the second time after 2018.

The 1st Roubaix Femmes marked an important milestone in the development of women’s cycling. The British Lizzie Deignan (Trek-Segafredo) made an energetic journey, 82 km of which she was alone, to take victory at the André-Pétrieux Velodrome: “Now we are part of history, there is no going back”, said the delighted winner.

22 years, 9 months and 27 days is the age of Tadej Pogačar (UAE Team Emirates) when he became a two-time Tour de France winner on July 18. The young Slovenian also finished the season at the top of the individual UCI World Rankings.