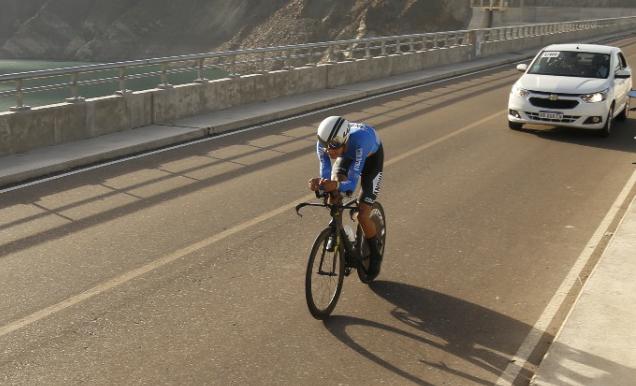 Colombian Rodrigo Contreras did not believe in the three Pan American gold medals of his teammate Walter Vargas in the men’s time trial and became the twelfth champion for his country in this event, which has been held since 1997 in the Pan American Road Championships.

With the 46.6 kilometers of the ITT of the Men’s Elite, he closed the first day of the Pan American Championship that takes place in San Juan from Thursday afternoon to Sunday, May 15. The new owner of the title, Rodrigo Contreras, gave Colombia one more gold in this contest, which he had already achieved in the Sub 23.

Among the candidates for gold, it was taken into account that several riders have already accumulated international awards in the tests against the clock. With the starting point at the Las Moras street roundabout, the cyclists looked for the false map of the urban area of ​​Ullúm, to regulate the cadence in the climb to the Punta Negra Dam.

After passing before the large frame of the public, they resumed their journey to the east descending the slide, as if to recover their rhythm. The last 18 kilometers of the solo pull were completed passing through the starting point until the reunion with the mountain.

The Venezuelan Orluis Aular, who is part of the Caja Rural Spanish cast, was the first to discount several places, marking the batch of those who best climbed the 1.2 km of the highest point. Also, the Argentine time trial champion, Alejandro Durán got into the conversation in the first third of the race, along with the Colombian Rodrigo Contreras, who had taken off gaining a slight advantage. The man from Cundinamarca did not neglect his pedaling, finishing second in the intermediate stages.

A connoisseur of the terrain, the Colombian three-time champion of these events, Walter Vargas, dominated the march from the beginning, because he subtracted important seconds in the comparison with the rest. The unstoppable cadence of the Team Medellín representative was superior and he worked in the whirlwind to defend the title.

Passing the last meters, Contreras finished off the definition, scoring as a candidate and breaking the time mark, which relegated his countryman Vargas to second place, who brought a constant train, but took its toll on him in the end. For his part, the Venezuelan Aular, completed the podium by entering the Top # 3 of the only ones who lowered the time in the 46-kilometer solo stretch.

With the CRI test for the Elite, the first day of the San Juan 2022 Pan American Road Championship ended. In the continuity of the activity, on Saturday, May 14, the Sub 23 platoon goes out on the Road to define the platoon champion . The appointment is at the San Juan Villicum Circuit starting at 13. After passing through the demanding Punta Negra Dam, the lot will look for the racetrack to place the crown on the continental contest.

Those who occupied the three steps of the podium expressed themselves after the effort to the local and international press.

1.- Rodrigo Contreras (Colombia): “We are happy with this long-awaited gold, looking for it for years, since 2017. The race seemed very hard to me. Now we hope to finish on the right foot on the route and then the Vuelta de Colombia will come”, said the champion.

2.- Walter Alejandro Vargas (Colombia): “I know San Juan very well, four years ago I did this same time trial, where I became champion and I also know him for the Vuelta with Team Medellín. I am happy with the result; I had been preparing it well, it was very difficult for me to climb the dam, which is where Rodrigo Contreras made the difference to win. Today we came both in Sub 23 and Elite, with the illusion of having a good race. For Sunday we hope to put in a good performance, where the three climbs to the dam will be fundamental”.

3.- Orluis Alberto Aular (Venezuela): “I am happy with my first podium. We have been doing a great job with the team. I am grateful to them and to the Colombian team that have always given me their support. I’ve always been looking for this result and thank God things came to me. It was a pretty nice race, with a long time trial and you had to know how to regulate it”, said the bronze winner.