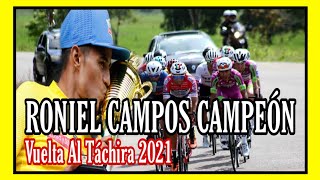 The native cyclist of Yaracuy, Roniel Campos (Atlético Venezuela) managed to revalidate his title of champion of the Vuelta al Táchira by bicycle after winning this Sunday the 56th edition of the Andean tour by confirming his leadership in the eighth and last stage, won by the Swiss Simon Pellaud.

Campos, who collected victories in the second, third and fifth stages, signed a total time of 23 hours, 36 minutes and 14 seconds in the 890.5 kilometers covered throughout the Andean classic, followed in the general classification by the Spanish Oscar Sevilla and Colombian Danny Osorio.

By revalidating with the Atlético Venezuela team the championship obtained last year with another group, Deportivo Táchira, the 27-year-old beetle joins the list of multi-champions in the competition, headed by ‘El Cóndor’ José Rujano with four titles (2004, 2005, 2010 and 2015).

“I was psyched to win, I prepared very well and here I am,” Campos celebrated in statements to the local press.

Sevilla, from Colombia’s Team Medellín, closed 2 minutes and 31 seconds behind the champion, and Osorio, a member of another Colombian team, Orgullo Paisa, 5 minutes and 32 seconds away.

The Swiss Pellaud, from the Italian Androni Giocattoli-Sidermec squad, took the victory in the last stage, of 99.8 kilometers in a circuit in the city of San Cristóbal.

The locals Medina, teammate of the champion Campos in Atlético Venezuela, and Juan Ruiz, of Trujillo Indet, completed the podium, both 13 seconds behind the winner.

Campos was eighth, marking the same time as Seville, tenth.

The 56th edition of the Vuelta al Táchira, carried out with special protocols due to the covid-19 pandemic, opened the 2021 calendar of the América Tour.