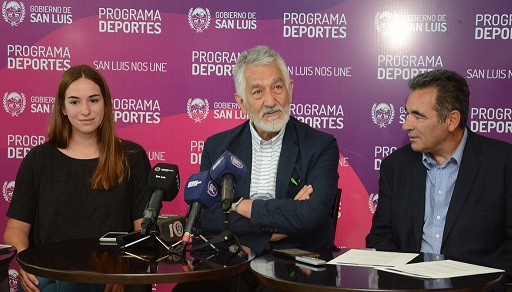 SAN LUIS, ARGENTINA. Alberto Rodríguez Saá announced this midday the realization of the “Vuelta del Porvenir San Luis Internacional” to be held from February 26 to March 1, 2020 in San Luis. “We restart a path that we recognize that we are doing well and that we would like to do better because its benefits and benefits are already demonstrated,” said the president, after informing that the reason for the suspension of these events in the province was the difficult economic situation from the country to which San Luis is no stranger.

During the presentation made at Terrazas del Portezuelo, the return of the Continental Team of San Luis was also announced, which will feature local projection cyclists.

The head of the Sports program, Cintia Ramírez, explained that “many people who love cycling will be very happy with this news” and stressed that the young cyclists who make up the Continental team “have a long road ahead and a great future. We bet on them and we want to support them to become strong and give them containment to grow in this sport. ”

The 10 cyclists of the Continental Team registered in UCI (International Cycling Union) who will compete in the Tour of the Future San Luis International that will travel through different points of the provincial territory, in 5 stages that promise to be exciting were presented.

For his part, Roberto Coca, technical advisor of UCI; Gabriel Curuchet, president of the UCRA (Cycling Union of the Argentine Republic) and Daniel Carabia, president of the Sanluiseña Cycling Federation, explained the technical specifications of the “Return of the Future San Luis International”.

International cycling returns to San Luis and from February 26 until March 1 again the routes of the province will live the color and joy of a party that was missed and much. (agenciaanluis.com)