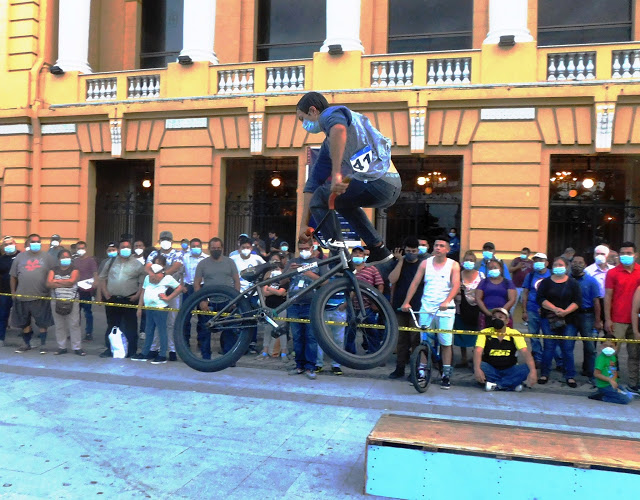 El Salvador BMX and the Salvadoran Cycling Federation, with the sponsorship of the European Union and the support of the Municipal Mayor of San Salvador, held a real cycling festival on Saturday October 31st, with the so-called European Contest 2020. A In the early afternoon, a large group of 200 riders in the ride mode left Plaza El Salvador del Mundo towards Plaza Morazán in the Historic Center of the capital, where the tour ended.

Simultaneously starting at 4:00 p.m. Plaza Morazán was the setting for the “European Contest 2020 BMX Freestyle” contest, which had a high technical level full of adrenaline, and very good acceptance from the public. The event was carried out under the sanitation protocol implemented by the FSC, which suggested the use of clusters or groups of cyclists for better safety, masks and alcohol gel were also distributed among the attendees.

A total of 49 BMX riders were present, in three different categories, 22 in Novices, the Pre Expert category had the participation of 16. In the experts division, 11 of the best Cuzcatleco riders attended the event.

In front of the National Theater next to the Metropolitan Cathedral of the Historic Center of San Salvador, the boys took flight. All under the direction and description of Hugo Rubio from ESA BMX, that the event had exciting moments, extreme movements, pirouettes and risky jumps, which were rewarded with applause by the crowd.

Between two series or shifts for the Rookies and Pre Experts, and three series for the Experts, each of the participants tried to perform their best maneuvers, two rails, a box and the stands of the square were the elements to be defeated by extreme cyclists.

The European BMX Contest was judged by a panel of three expert judges and a National Commissioner, who endorsed the competition that included the best exponents of this extreme modality of Freestyle or Park BMX.

The winners of the three participating categories were:

During the award ceremony on the podium, keeping the health distance and the use of masks, all the winners were awarded with medals allusive to the European Contest 2020.

The next appointment is on Saturday, November 7, at two in the afternoon at the Soyapango Sports Center, where the 2020 National BMX Park Championship will take place.