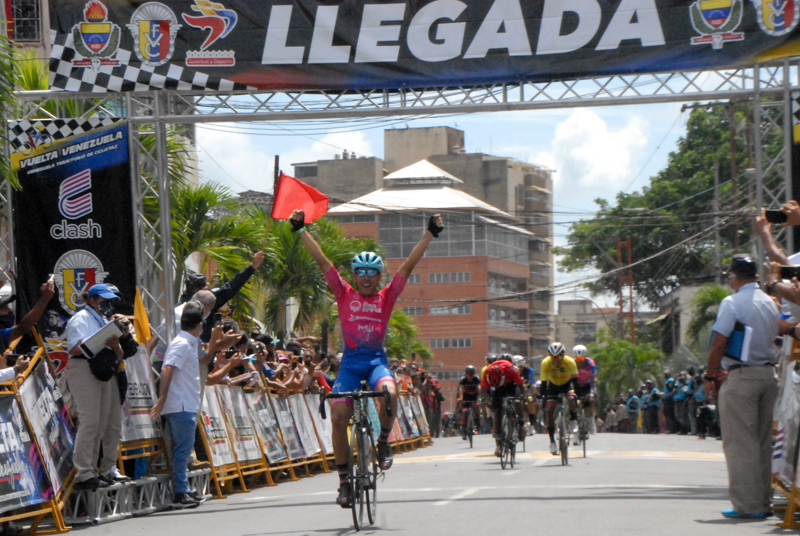 The young under-23 rider, Cesar Sanabria (Fina Arroz – Venezuela País de Futuro) won the victory in a spectacular sprint in stage II of the 58th edition of the Vuelta Ciclista a Venezuela, which is still led by Luis Gómez (Team Carabobo), third this Monday behind Romer Medina (OW Bike La Guaira).

The 98.50-kilometer stage started at 10:00 in the morning in front of the Plaza Bolívar de Charallave under a huge number of fans who applauded the passage of the multicolored caravan. The first partial emotion of the test (mountain prize) took place at kilometer nine, with a triumph for José García (Bolivarian Government La Guaira), the second place was scored by the Trujillano, Carlos Torres (University of Trujillo – Transportation Wilnor), Jorge Abreu (Fine Rice – Venezuela Country of the Future) completed the podium.

After the sprint there was a flight made up of, José Díaz, Roniel Campos (Bolivarian Government of La Guaira – Vargas Mayor’s Office), Luis Pinto Fina Arroz – Venezuela País de Futuro), Davirson Molina (Revivir – Team Produgar Caracas) and Alexander Villasmil ( Club Leonardo Sierra – Mérida), reaching a difference of more than a minute regarding the lot; However, there was work by the representatives of Pegaso La Guaira, the Colombian currencies and the neo-Spartans until they reached them.

The second sprint (by points) at kilometer 49.3 was in the hands of Davirson Molina, later they passed, José Díaz and Roniel Campos. After 62.9 kilometers, the third partial emotion of the competition took place, a bonus sprint, won by Julián Pastrana (Team Gesprom Evolutión – Colombia), passing behind, Luis Gómez (Team Carabobo) and Miguel Ubeto (M.U Trainning – Banesco). The fourth point Sprint located at kilometer 87.7 was a carbon copy of the third, Pastrana, Gómez and Ubeto.

With a number of runners losing their stride due to the race train imposed by those most likely to win, the road with small swings and the star king in its maximum splendor, the test was prepared for the arrival in a group.

Cesar Sanabria (Fina Arroz – Venezuela País de Futuro) gave a blow a few meters to the end, placing an impressive step and took the victory in the II stage of the Vuelta Ciclista a Venezuela, after a second the peloton arrived.

Samuel Antica (LGV) stands out as the young leader of the Vuelta, after crossing the finish line in sixth place.