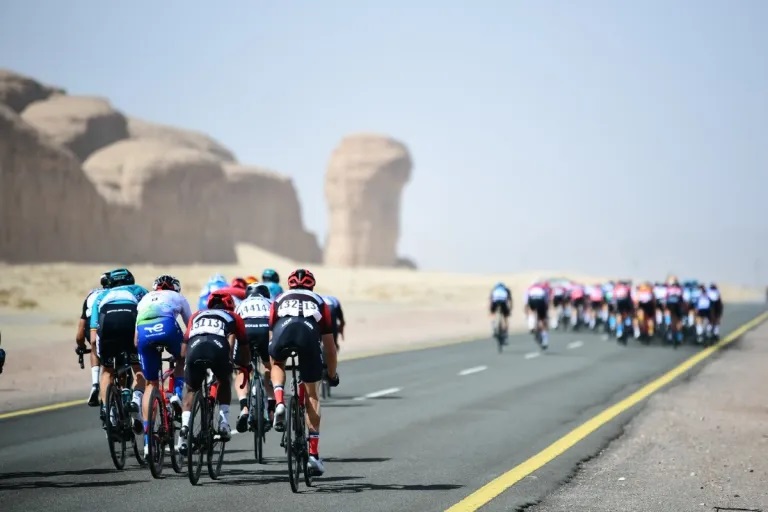 The fans did their thing and Maxim Van Gils (Lotto-Soudal) took advantage of the crosswinds to win the fourth stage of the Saudi Tour 2022, developed over 149.3 kilometers, and after which the Colombian Santiago Buitrago (Bahrain – Victorious) fell to the second position of the individual general.

The Belgian rider was the strongest against the crosswinds and at the end he gave a blow of authority to win alone. Luka Mezgec (Team Bike Exchange) came second and Tim Declercq (Quick Step Alpha Vinyl) third. While the Colombian Santiago Buitrago came in eighth place 40 seconds behind the winner and gave the lead of the race to Van Gils.

The queen stage of the Arab race was full of spectacle. The day’s breakaway was formed immediately after the start with Greek Polychronis Tzortzakis (Kuwait Pro Cycling) and Malaysian Afiq Othman (Terengganu Polygon Cycling Team). The lead for the daring forwards quickly climbed to two minutes, the peloton choosing to go at a leisurely pace. The first intermediate sprint of the day was won by Tzortzakis.

The leader Santiago Buitrago stayed in a second group in which those from Bahrain led, with the collaboration of the UAE Team Emirates and Uno-X Pro Cycling.

On the ascent, the Italian Bagioli easily smashed the rest of the adventurers and took the lead alone, but Van Gils gradually resurfaced like a Phoenix, catching up with the Italian and surpassing him, crowning with 30″ of advance on the Italian and 1’10” over the leader Santiago Buitrago.

Then Van Gils began a time trial of about eight kilometers to the finish. The Belgian rode alone to victory. In the final meters, Bagioli was surrounded by the chasing group. Slovenian Luka Mezgec won the sprint for second place and Belgian Tim Declercq finished third.

This Saturday the fifth and final stage of the Saudi Tour 2022 will take place, with 138.9 kilometers around AlUla Old Town on mostly flat terrain with a foreseeable arrival at the sprint unless the dreaded crosswinds appear.