Sergio Higuita, first Latino on the stage podium of the 2021 Tour de France 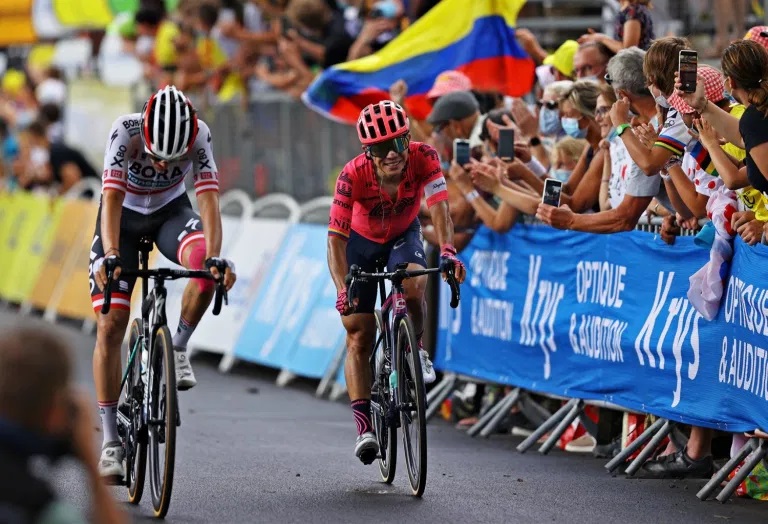 Survivor of the day’s getaway and after starring in an authentic solo recital, Bauke Mollema (Trek-Segafredo) was left this Saturday with victory on stage fourteen of the Tour de France, in which for the first time in this edition, a Latino, Colombian Sergio Higuita (EF Education – Nippo), took the podium with third place in the segment.

Contested over 183 kilometers between Carcassonne and Quillan, Mollema let go of the break in the last 40 kilometers and arrived at the goal with a comfortable advantage in his favor of 1 minute 15 seconds over Patrick Konrad (Bora-Hansgrohe) and Sergio.

The general classification underwent an important variation, as the French Guillaume Martin (Cofidis), acceded to the second box of the individual general classification, beating Rigoberto Urán (EF Education Nippo). The local climber who was part of the escape of the day and entered the goal in box eleven, passed the Colombian and got fully into the dispute for podium positions.

By failing to get involved in the great getaway of the day, or adding units in the five ports of the day, Nairo Quintana (Arkea Samsic) gave up the leadership of the mountain to Michael Woods (Israel Start-UP) who went on to command this classification with 54 units, over 50 of the Colombian who in this Sunday’s stage will have a great opportunity to recover it.

In the first 90 kilometers of the race, prior to the ascent to Col de Montségur and after an intense fight, the great getaway of the day was made up of fourteen men, among which the presence of Colombian climbers Sergio Higuita (EF Education- Nippo) and Esteban Chaves (BikeExchange), who were great protagonists in the leading group.

In the final two kilometers of ascent of the Col de Saint-Louis, the Colombians Higuita and Chaves led the pursuit over Mollema that lost ground, but remained a solo leader. While with the five minutes in favor of the escape Guillaume Martin (Cofidis) put in check the second place in the general of Rigoberto Urán and forced EF Education Nippo to exercise the persecution.

The second week of the race concludes this Sunday with a day of 191 kilometers that promises to be full of emotions from the start in Céret to the arrival in Andorra la Vella, fraction four mountainous difficulties; one of the second category and three more of the first category, the last of which will be the Col de Beixalis, which ends fifteen kilometers from the arrival.