Sergio Higuita, the best for America in noisy opening of the Tour de France (+ fall video) 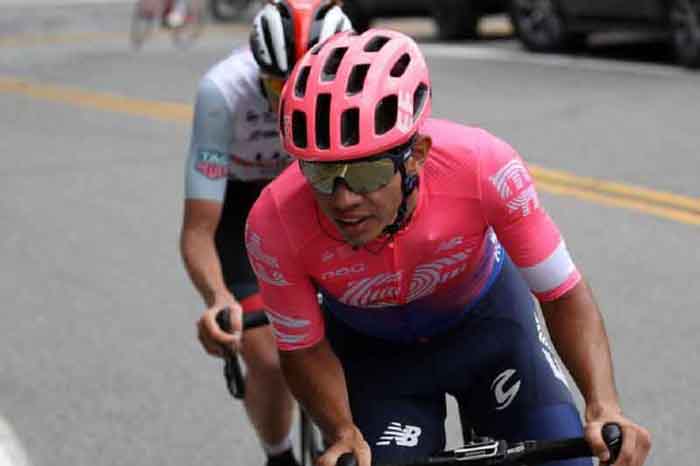 Julian Alaphilippe (Deceuninck Quick Step) was left with a deserved and fight victory this Saturday in the initial stage of the Tour de France, disputed over a distance of 197 kilometers between Brest and Landerneau, where the best for America was the eighth place of the Colombian Sergio Higuita (EF Education – Nippo), while a massive reckless knockdown by a fan stole the biggest headlines.

The reigning World Road Champion became the first to wear the yellow jersey in a highly nervous day in which there were multiple massive falls, although only one runner withdrew from the race due to serious injuries to them.

The riders from America played a great role, as in addition to Higuita, coffee growers Esteban Chaves (Team BikeExchange), Rigoberto Urán (EF Education – Nippo) and Nairo Quintana (Team Arkéa Samsic) finished in positions 11, 16 and 17 at just as just eight seconds off the winner; while Ecuadorian Richard Carapaz (INEOS Grenadiers) did it in 22nd place, 13 seconds behind Alaphilippe.

For his part, another Colombian Miguel Ángel López (Movistar Team) who was involved in the last massive fall of the day 7.6 kilometers from arrival, was one of the great victims of the day, arriving at the goal in position 41 at 1 minute 49 seconds behind the winner, while his countryman Sergio Henao (Qhubeka NextHash) anchored in box 43 with the same difference.

Perros Girec will start this Sunday the second fraction of the French round, a 183-kilometer stage that presents six ascents, four fourth and two more third category, the last of them located on the finish line itself at the Muro de Brittany.

Higuita, happy to be in the top ten

The runner of EF Education Nippo, highlighted the fortune that he had with his team not to suffer falls. “I am very happy to start this Tour de France, a very special Tour for me, I want to enjoy it to the fullest. It was a very nervous stage, as we expected, a complicated terrain, ‘leg breakers’. In the end there were many crashes, thank God we were not involved in any, we were lucky that nothing happened to us and in the end we got well with Rigoberto ”.

The Antioqueño spoke of his work during this day. “I was very aware of Rigo all day, in the cuts that occurred with the falls, I was there to give him a hand. A very explosive finish, we were able to be very well positioned, we were lucky not to fall in the last fall that was 7 kilometers away ”.

Higuita revealed that he contemplated going out to the Pogacar and Roglic mark on the end. “On the way up I felt really good, in the end I wanted to move, but I decided to accompany Rigo until the end. I was able to do a good sprint, since Pogacar and Roglic were going to cut ahead, as it was such an explosive arrival they gave a part, I had the intention that there would not be, that Rigo would not lose a few important seconds ”.

“In the end I was able to enter the Top 10 of the stage and I am very happy for this and hopefully tomorrow will be a better stage and we can enjoy this Tour and give many joys to all of Colombia,” added the rider who entered the finish eighth this Saturday.