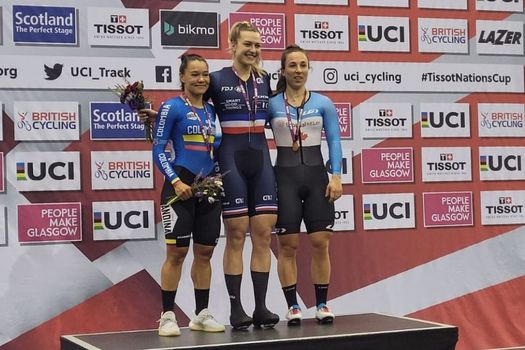 With her third podium (silver in the keirin) Colombian sprinter Martha Bayona said goodbye to the Track Cycling Nations Cup, which held its first stop on the calendar in Glasgow this weekend and in which Colombia was the highlight for America with five medals.

This Sunday, Martha Bayona was once again the protagonist and won second place in the keirin, only surpassed by 0.044 seconds by the French Mathilde Gros, while the Canadian Lauriane Genest obtained the bronze.

The Colombian had already added a third step on Friday in the speed test, and a title on Saturday in the 500 meters against the clock. In this difficult test that closed the competition program, the South American had ranked first in the first two rounds of the qualifying heats, which made her one of the favorites to win the gold medal.

However, despite the fact that they did not get the victory, the balance for Bayonne is very good, since they finished their participation in Scotland with three medals, after having won three gold medals last year in the Nations Cup stop which was organized in Cali.

Colombia also won another gold medal in the tournament thanks to Cristian Ortega, who won the men’s kilometer test. This award is also added to the silver medal won by Kevin Quintero in the men’s keirin final.

Other results at the Sir Chris Velodrome

The British Ollie Wood (Team Inspired), with 145 points, triumphed in the difficult omnium test, with the silver medal to the Spanish Sebastián Mora (134) in the omnium, with the Belgian Fabio Van den Bossche completing the podium at compile 110 units.

The female madison turned out to be quite an eventful event, with the expulsion of the Uzbek duo and the need for two race stops due to the fall of several couples, with the abandonment of four duos. The French Valentine Fortin and Marion Borras opened a gap in the sprints, without any other team overshadowing them in this aspect, to the point of mathematically winning the test after the penultimate sprint. With the silver were the Italians Elisa Balsamo and Vitoria Guazzini, ahead of Amalie Didericksen and Julie Leth, from Denmark.