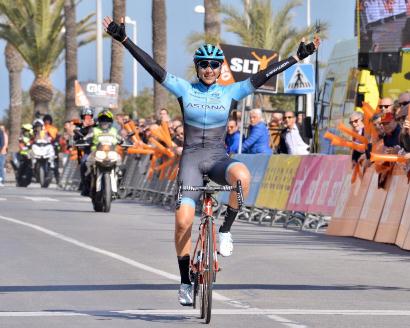 The Mexican cyclist of Astana, Lizbeht Yareli Salazar has won the third stage of the Valencian Cyclist Setmana run today between Valencia and Sagunto at a distance of 94 kms. With a time of 2: 23.38, he defeated Elizabeth Holden (Bizkaia Durango) in the final sprint.

In the third place over time the rest of the platoon completed the podium also the member of the Astana the Cuban Arlenis Sierra who maintained the seventh place of the individual general classification, this section that continues to command the Dutch Anna van der Breggen with 35 seconds of advantage about the German Clara Koppenburg from Bigla-Katusha. The Trinitarian Teniel Campbell (Valcar) ranked 5th and completed the Latin American in the Top 10 of the stage

The third stage started from the Plaza del Ayuntamiento de Valencia. After passing Serra, at kilometer 23, the height of the second category Oronet began to climb. The 5 and a half kilometers of ascent did not break the depleted squad of 123 units. The first cyclist to crown the Oronet was the Basque Ane Santesteban (Ceratizit – WNT) ahead of the Dutch Demi Vollering (Parkhotel – Valkenburg).

Between the two seems to be the fight this year for the best climber jersey. It was in the descent of the Oronet, on the way to Torres Torres, when the escape of the day forged, initially formed by the Italian Elena Pirrone (Valcar) and the British Lizzie Holden, who were later joined by the Mexican Yareli Salazar.

The three were perfectly understood and the difference with respect to the main squad was always increasing, reaching stabilization above four and a half minutes.

It was after passing through the special sprint of Estivella, 25 km from the finish line, when the Italian Pirrone began to falter and the Mexican Salazar and the British Holden went ahead.

The two were relieved until shortly before the last kilometer when Holden tried to surprise Salazar aware of the superiority of the Mexican pistachio in an arrival to the sprint between them.

Astana’s cyclist was able to respond to the British attack, sticking to her wheel and overcoming it in the last 50 meters.

The fourth and final stage of this edition of the Valencian-Volta Comunitat Valenciana Fèmines Cycling Week takes place this Sunday in the province of Castellón. The runners must complete a 140 km course that will make it the longest this year.