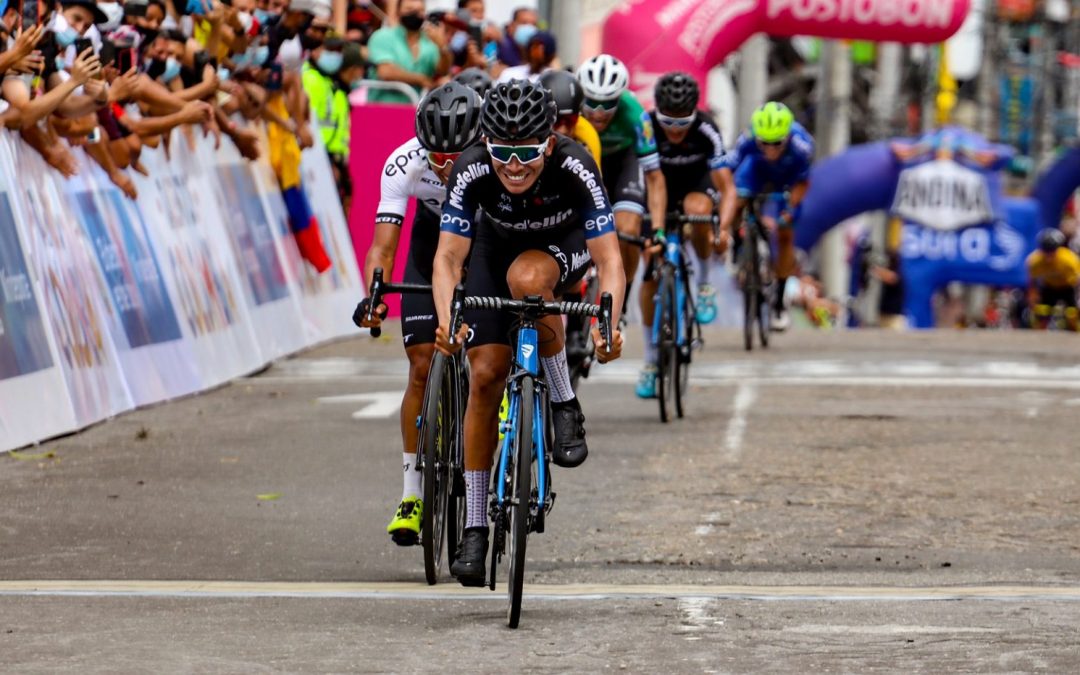 Brayan Sánchez (Team Medellín) won this Monday the third stage of the Vuelta a Colombia, disputed over 188 kilometers, between Mosquera and Ibagué. Oscar Sevilla (Team Medellín) retakes the leadership of the test, before the appearance of the high mountain.

In a package between high-powered men, the Antioqueño surpassed Aldemar Reyes (EPM Scott) who with his second place, ascends to the second position of the general classification, followed by Alexander Gil (Orgullo Paisa) who entered the finish in the third position.

Two ascents of considerable difficulty in the last kilometer were decisive for the already reduced main group to define the winner and the general classification to change its scenery. Until today leader Bryan Gómez (SuperGIROS Alcaldía de Manizales) failed to stay in the top group and gave up his position to Oscar Sevilla (Team Medellín) who entered the finish line in sixth position.

José Serpa (Team Cartagena), Juan Pablo Restrepo (Colnago CM Team), Miguel Mogollón (Mayor of La Vega) and Steven Cuesta (Sundark Arawak) were part of the great getaway of the day, runners who built a notable difference in their favor, more than four minutes and they put the main group in trouble that was forced to pursue the persecution.

In pursuit of the members of the day’s great getaway, they broke away from the group in the final fifty kilometers; Jhonny Millán and Elkin Malaver (Strongman Bicycles), Banzer Bernal and Wilmar Castro (Indeportes Tolima), runners who could not establish the connection with the head of the race, from which Miguel Mogollón and Steven Cuesta later emerged.

Over the last forty kilometers of the race, José Serpa and Juan Pablo Restrepo increased the pace and left in the lead. While behind his back the Millán sextet, Malaver, Bernal, Castro, Mogollón and Cuesta tried unsuccessfully to establish the connection.

By mutual agreement, Colombia Tierra de Atletas-GW 4WD Renta Car, Team Medellín and EPM Scott exercised the pursuit in the last fifty kilometers of competition on the leading men, because Juan Pablo Restrepo put the leadership of the test in check . Over the last twenty, the main group hunted down the group of five men that made up the second group and already reduced their difference to two minutes over the leading duo.

The extensive physical deployment and the high temperature in Tolima territory were determining factors for the lag of Juan Pablo Restrepo who could not maintain the intense pace imposed by the tall José Serpa, who over the last 18 kilometers of the race accelerated the pace and left for the victory. The brave attempt of the sucreño vanished six kilometers from the finish, before the rigorous control established by EPM Scott.

The high mountain appears this Tuesday in the fourth section, which presents the first high final of the Vuelta. A day that departs from Ibagué and will travel 122 kilometers to the finish line at Alto de La Línea, a mythical out-of-category port where a great selection is expected from the group of contenders for the title.