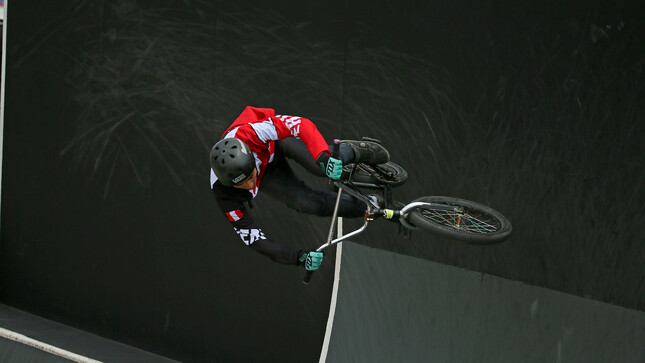 Encouraged by fans from the stands, Peruvians Diego Lazo, Harafa Fajardo and Arnol Montañez made the best of their repertoire and fulfilled their dream of qualifying for the elimination round of the Pan American BMX Freestyle Lima 2021, which is held at the Legado del Complejo headquarters. Pan-American Green Coast.

“We have the honor of hosting a Pan American BMX Freestyle Championship for the first time in Lima. This organization will be recorded in the history of Peruvian sports. Without a doubt, the infrastructure that remained of Lima 2019 has made the event possible. In this way, Legado, in charge of the Pan American venues, will continue working to host more international competitions ”, said Giorgio Mautino.

Subsequently, the eleven international delegations put their skills to work, competing from the BMX Freestyle track, located in the Costa Verde Pan-American Complex, which is unique in the country and has the international certifications required for the use of high-performance athletes. .

However, the Peruvian delegation, made up of eight members, fought with Diego Lazo (70.00), Harafa Fajardo (62.83) and Arnol Montañez (63.67), qualifying for the elimination round.

“Infrastructure is a great part of help for us, because it helps us to have that global competitive level. The BMX circuit has the official measures and we motivate ourselves when training and competing. In this way, Peruvians have grown little by little, the idea is to add people to this sport. Fighting and being constant, we will fulfill our dreams ”, highlighted Harafa Fajardo.

In turn, the Brazilian Gustavo Batista, considered one of the best riders in the world, highlighted the event organized by the Peruvian National Cycling Federation in coordination with the Legacy Project. In addition, he praised the BMX freestyle circuit, which conforms to UCI (Union Cycliste Internationale) standards.

“I am happy to be in Lima, because we are reunited with friends and with the best of BMX in America. We know in Lima it continues to host international tournaments and this BMX circuit looks impressive, in perfect condition, ”said Gustavo Batista.

The Pan American BMX Freestyle Lima 2021 Championship has the participation of more than 60 athletes, between women and men, from 11 countries, highlighting Argentina, Brazil, Chile, Colombia, Costa Rica, Ecuador, the United States, Panama and Venezuela, who compete the medal and the title of Pan American Champion.