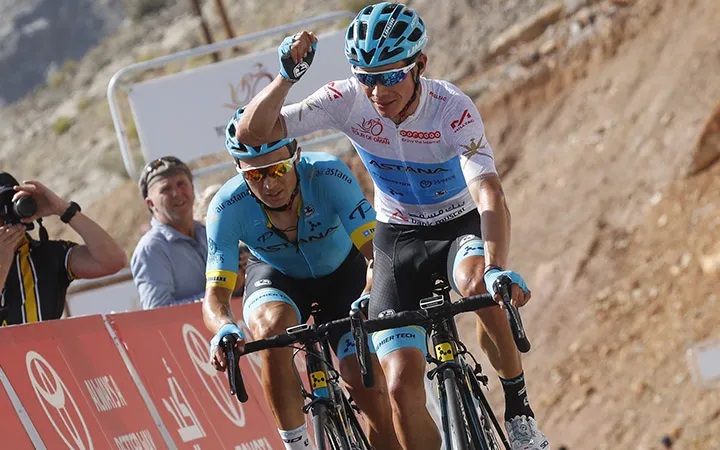 It was an open secret but it is already official: the Colombian cyclist Miguel Ángel “Superman” López (27 years old) will run the next seasons (2022 and 2023) in the ranks of Astana Qazaqstan, as announced this Friday by the famous club in which already the South American rider had played.

In this way López returns to what was his house a year after heading to Movistar, from where he left through the back door after breaking his contract after the episode that the cyclist starred in in the penultimate stage of La Vuelta.

With this team “Superman” made the leap to professionals in 2015 and with which he has achieved his greatest successes in his career, among which three stages of the Vuelta a España stand out, third place in the general La Vuelta in 2018 and the third place in the general classification of the Giro d’Italia in 2018 and the stage with the arrival at Col de la Loze in the Tour de France 2020, in addition to the general of the Tour of Switzerland in 2016 and the Tour Colombia 2.1 and the Volta a Catalunya in 2019, and Milan-Turin in 2016.

After six years at Astana, in 2021 López decided to head to Movistar in a transfer that was marked by the statements that the Colombian had towards the team in La Vuelta in 2019, when he described them as “the same old fools” and “stupid”.

Having forgotten those quarrels of the past, he was slow to make his debut with Movistar after contracting the coronavirus, although he achieved important successes such as a stage and the general of the Vuelta a Andalucía and prevailing at the Mont Ventoux Dénivéle Challenge in his first races.

After being sixth in the Dauphiné, a fall prevented him from shining on the Tour, where he dropped out. And in the Vuelta a España López had a great performance with his victory at the top of the Gamoniteiro before leaving in the penultimate stage on the way to Mos after being cut off from the group of favorites when he was third overall.

In statements collected by the Astana team, López celebrates his return to the team in which he has achieved most of his great successes. “Going back to Astana is like coming home. In professional cycling, a cyclist who wants to continue growing sometimes has to change something in his career to gain new experiences.

“Sometimes he works out and sometimes he doesn’t. The important thing is that I have returned home with the team, it has given me a lot and with which, I am sure, we will have many more wonderful moments. I have a lot of work ahead of me for the new season which I hope will be full of success for myself and for Astana Qazaqstan”.

A homecoming that was also highly celebrated by Alexandr Vinkourov, Astana manager. “Miguel Ángel is a cyclist who has grown and has achieved his greatest successes in our team, and that is why I am happy that, after a break, he returns to Astana. Last year Miguel Ángel gained a lot of experience that, perhaps, he would not have achieved. in our team.

“I think that experience, good or not, will help him grow. López has shown that he is one of the strongest cyclists in the world and has continued to win at the highest level, so it is fantastic that Miguel Ángel continues his career at Astana Qazaqstan”.