Team Medellín complete to the podium in Vuelta a Venezuela 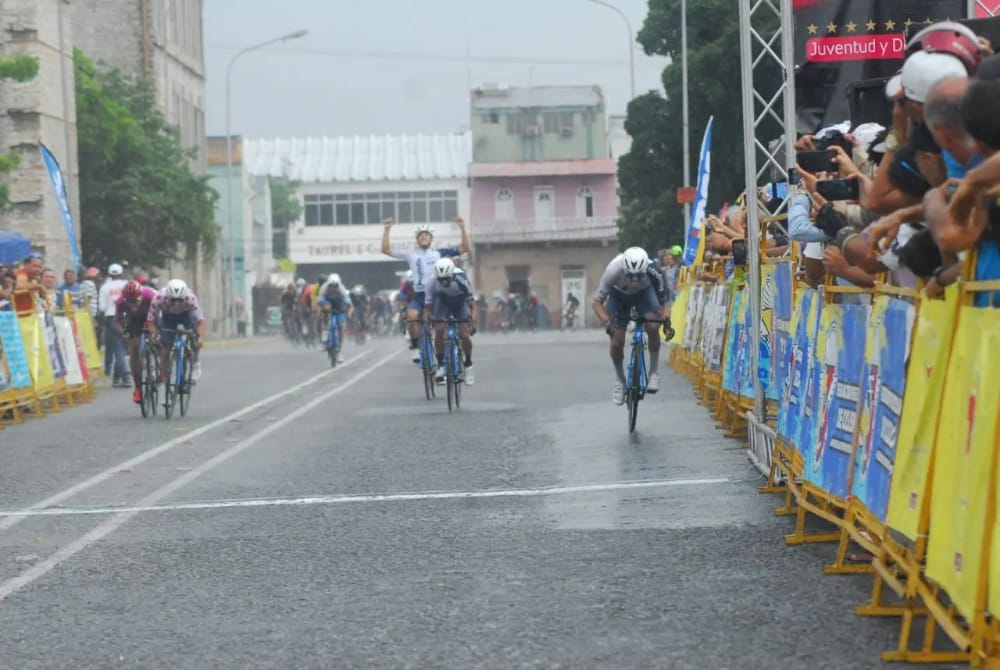 Team Medellín achieved the one, two and three of the fifth stage of the 59th Vuelta a Venezuela, against a heavy downpour, with the victory of Víctor Ocampo, escorted by Cristhian Montoya and Weimar Roldán, but Luis Gómez (Team Carabobo) kept for third consecutive day the leader’s shirt.

Ocampo, champion of the 2021 Junior Pan American Games time trial, won the fifth fraction over 187.6 kilometers starting at the Ortiz Circuit and finishing in Puerto Cabello, after leading his team’s display and being the fastest in the chaotic pack , beating his two teammates in the final meters.

Luis Gómez (Team Carabobo) remained at the head of the individual general classification of the Vuelta a Venezuela with 2 seconds difference over his compatriot César Sanabria (Venezuela País Futuro – Fina Arroz) and 12 over the Colombian Weimar Roldán (Team Medellín EPM) .

A section that would depart from the town of Ortiz, left from the Olympic Village of San Juan de Los Morros (Guárico) with 127 cyclists of the 145 who started from Puerto Ordaz on July 24, after the withdrawal of the Italian Giulio Masotto (Team Corratec); the current champion of the Vuelta al Táchira, Roniel Campos (Andean Pride); Colombian Juan Guevara (Team Gesprom-Colombia) and Ronaldo Fuentes (José Prada-Sucre Foundation).

There was a tough fight from the start, where the protagonists gave two 8.1-kilometre bypasses, with Luis Gómez (Team Carabobo Fundación Ángeles Hernández) in the lead along with his closest opponents in the general classification, such as César Sanabria (Fina Arroz Venezuela Country of the Future), the U-23 leader, Johnny Araujo (Bolivarian Government of Trujillo Orbea), Weimar Roldán (Team Medellín EPM-Colombia) and Miguel Ubeto (Banesco).

Also at the wheel were the great animators of Team Corratec-Italy), Venezuela La Guaira Transport Mission, more than the Colombian and Ecuadorian squads. Likewise, the Andean Pride teams, Lotería del Táchira and Team Carabobo, who protected their leader Luis Gómez.

The first emotion of the fifth chapter took place, the sprint won by Miguel Ubeto, followed by the Serbian Dusan Rajovic (Team Corratec-Italy) and Jhonny Araujo.

Later, the first significant escape occurred with runners José Alarcón and Reinaldo Arocha, both from the Gran Misión Transporte Venezuela La Guaira squad, but it did not have the desired effect, because both were captured by some 17 adversaries, including the leader Gómez.

The third emotion was obtained by the leader Luis Gómez, escorted by César Sanabria (Fina Arroz Venezuela País de Futuro), his closest rival in the general classification, and Miguel Ubeto, another of the contenders for the title.

The rain came to give it more emotion

The fourth and last sprint was taken by Segundo Navarrete (Team Saitel Ecuador), Isaac Yaguaro and José García, who escaped for about 30 kilometers, reaching a difference of 40 seconds, where they were joined by Reinaldo Arocha, but then they were taken in the proximity of the town of Trincheras, where Team Carabobo was commanded by leader Luis Gómez.

Likewise, the rain became the protagonist, a plus that gave more emotion to the race, where the compact group began to settle down to go for the fight in the last kilometers.

In the Bolívar square of Puerto Cabello (Carabobo) in front of the imposing boardwalk, the packaging arrived, in another great mass auction, but now with a heavy downpour, where the Colombians gave “soup and dry” cutting the local triumphs and the first two from Team Corratec-Italy.

The race continues this Friday, July 29 with the sixth section (10:00 am) with a circuit in the Independencia Municipality between Libertador-Eduardo Lapi-Intercomunal avenues, a total of 18 ring roads of 7.1 kilometers for 131.4 Kms, where four sprints.