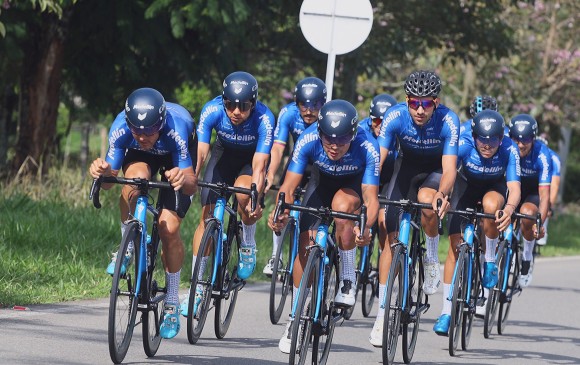 Team Medellín wins stage 1 of the 2020 RCN Classic and they put the first leader with Brayan Sánchez. The day was arranged in a team time trial between Ibagué and Alvarado, Tolima. The teams started leaving at 10:30 am.

The first day of the Classic was played over 27.1 km on a track that was mostly downhill. The first teams gave the first references both on the road conditions and on the stopwatch.

However, the most important references would arrive with the strongest teams, whose departure would take place almost around 11:00 or 11:30 am. Colombia Tierra de Atletas would be the first to leave a relevant mark for the day’s classification.

The team, which had just won the Vuelta a Colombia 2020 with Diego Camargo, this time set a mark in the team time trial of 25 ′: 54 ″, twenty (20) seconds better than the UAE Team Colombia team.

However, the 2019 title-winning team with Sevilla, Team Medellín, was expected to beat the time of Colombia Tierra de Atletas. With a great record, Brayan Sánchez and the Paisa team won the stage with 25 ′: 09 the lead of the race.

On the podium they were followed by the Colombia Tierra de Atletas de Darwin Atapuma, a team that also placed the first sub 23 leader. Then the UAE Team Colombia with its group of sub 23 runners who knew how to move on this first day of the race.

The second fraction of the Classic will be held this Monday in Ibagué over a distance of 148 kilometers, a day that on arrival presents an uncategorized ascent, in which differences are expected between the main contenders for the title of the test.

RESULTS BULLETIN OF THE FIRST STAGE: