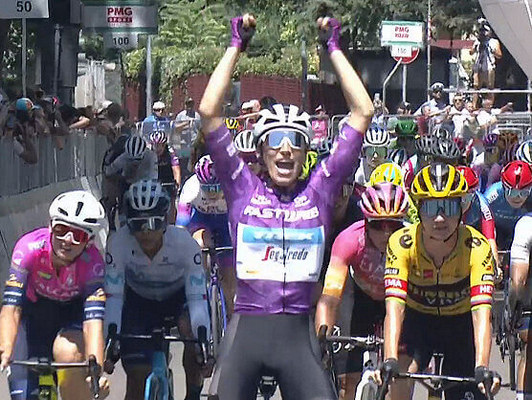 The Cuban Arlenis Sierra entered sixth today in another massive sprint in the fifth stage of the Giro a Italia, disputed over 126.1 kilometers between Carpi and Reggio Emilia. Her Movistar team maintained the individual leadership of the Dutch star Annemieek Van Vleuten.

Arlenis once again fulfilled the role of teammate with excellence, staying all the time with her teammates under the care of the Olympic and world champion Annemiek, who crossed in 24th place with a similar time of 3:05.02 hours to the winner, the Italian Elisa Balsamo (Trek-Segafredo).

The hundred riders who arrived behind Balsamo deserved the same time, so there were no significant changes in the individual general classification after the longest section of the tour.

Movistar, which is second among 24 teams, keeps the Serbian Jelena Eric in seat 17; Arlenes at 24; the Colombian Paula Patiño in 34; the Danish Emma Norgaard in 107 and the French Aude Biannic in 118.

For the Italian champion of powerful shooting, this was her second victory, after prevailing on that day, and wearing the “pink jersey” in the third and fourth, until in the latter Van Vleuten attacked in the mountains and triumphed with enough difference to snatch her privileged position from the also world champion.

According to the site esciclismo.com, the last kilometer was somewhat bumpy; however, the favorites had no setbacks to discuss the sprint, in which the Dutch Charlotte Kool (DSM) entered second and behind her her compatriot, the multiple Olympic and world medalist Marianne Vos (Jumbo-Visma).

Once again it was a day characterized by heat, with a time of 3 hours, 5 minutes and 2 seconds, Balsamo – world champion and cycling jersey of the race – prevailed at the arrival in Reggio Emilia ahead of the Dutch Charlotte Kool (DSM) and Marianne Vos (Jumbo-Visma), second and third, respectively.

A quintet starred in the break of the day. The group opened the pace from the first bars of the race until the multicolored “ball” quelled the rebellion by capturing the Italian Giorgia Bariani (Top Girls Fassa Bortolo), the last of the escapees to be absorbed less than five kilometers from the line of goal.

This Wednesday the sixth stage will take place in a section of 114.7 kilometers starting in Sarnico and ending in Bergamo.

Taken from the Weekly Jit, by Lisset Isabel Ricardo