The Czech Jan Hirt surprised, but Carapaz is still the leader in Italy 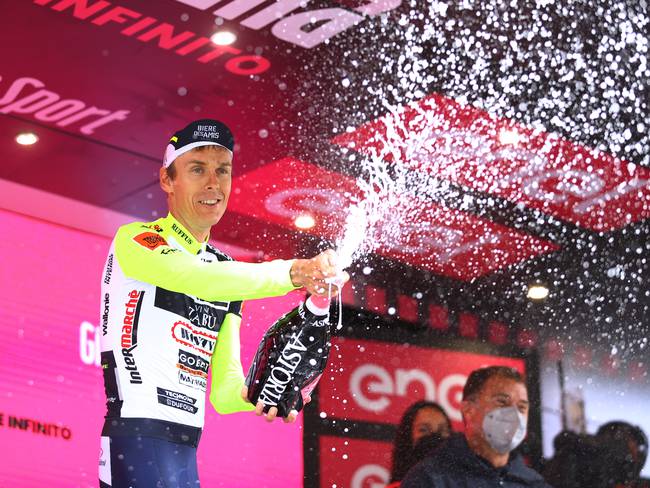 The Czech Jan Hirt (Intermarché Wanty) was the strongest man in the large breakaway of the day and claimed victory alone in the sixteenth stage of the Giro d’Italia, disputed between Salò and Aprica, with a distance of 202 km, in which Richard Carapaz (Ineos) kept the pink jersey, although in the end he gave up three seconds to the Australian Jai Hindley, who follows him in the general classification.

Hirt (Trebic, 31 years old) surprised on the last climb of the day in the Valico de Santa Cristina with an attack that was definitive. He went alone to the finish line, leaving his fellow escapees nailed, among whom was Alejandro Valverde. He did not allow himself to be overtaken by the favorites either, with Carapaz, Landa and Hindley trying to give Almeida time.

Finally Hirt took a prestigious stage entering the finish line with the desire to celebrate the greatest success of his record, which includes five victories. He set a time of 5:40:44, 7 seconds ahead of the Dutchman Thymen Arensman (DSM) and 1.25 minutes ahead of the Hindley quartet, who won three bonus seconds, Carapaz, Valverde and Landa. The Portuguese lost 14 seconds compared to his direct rivals.

The mythical stage of the Mortirolo did not revolutionize the general, it only provided minimal details. Carapaz controlled the stage without burning the ships. In the end he pulled Almeida away, a good stat for the final time trial, but Hindley came within 3 seconds. The Portuguese is third at 44 seconds and Landa fourth at 59. Within the ‘ + Char(39) + ‘top 10’ + Char(39) + ‘ were Pello Bilbao, seventh at 3.51 minutes, and Valverde, tenth at 9.04.

However, the winner of the Giro-2019 valued above all the 14 seconds lost by the Portuguese Joao Almeida, his number one enemy for the final time trial.

I thought he was going to win third place and I couldn’t do it, but it was still a good day. I have lost some seconds with Hindley but I gained more with Almeida, so the balance is positive, he said.

This Wednesday the seventeenth stage will be run, which will take the peloton to Lavarone, after covering 168 kilometers from Ponte di Legno.