The fastest youth against the clock: Alena Ivachenko and Gustav Wang 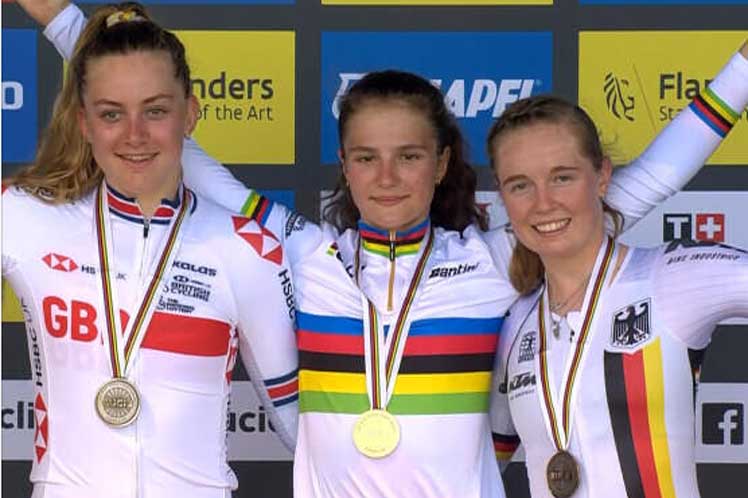 The Russian Alena Ivanchenko conquered this Tuesday the universal title of the women’s youth time trial, registering a time of 25:05 minutes during the third day of the World Road Cycling Championships in Flanders, Belgium, where again no rider from America could climb the podium.

Ivanchenko starred in the best time in the 19.3 kilometer route between the town of Knokke-Heist and Brugge, to consolidate her dominance in the test, after previously celebrating the monarch’s jersey in the European Championship of the discipline.

The Russian rider surpassed in speed the British Zoe Backstedt (25.16) and Antonia Niedermaier (25.30), who reached the silver and bronze metals, respectively.

In the final of the junior time trial 55 exponents took part and for America the best performances were carried out by the American Olivia Cummins in eighth position; and Canadian Nicole Bradbury in 22nd place.

For his part, in the men’s competition, the Danish Gustav Wang, exhibited the best time in the 22.30 kilometer route to beat the British Joshua Tarling (silver) and the Belgian Alec Segaert (bronze), in a test that grouped 79 riders .

On our continent, the best dividends fell on Americans Alexander Gustin (14) and Cole Kessler (31), Canadians Dylan Bibic (19) and Michael Leonard (39); and the Colombians Brayan Vargas (42) and Brayan Molano (64).

The World Cup in Belgium will continue this Wednesday with the definition of the mixed team time trial among youths.