The first details of the Tour de France route 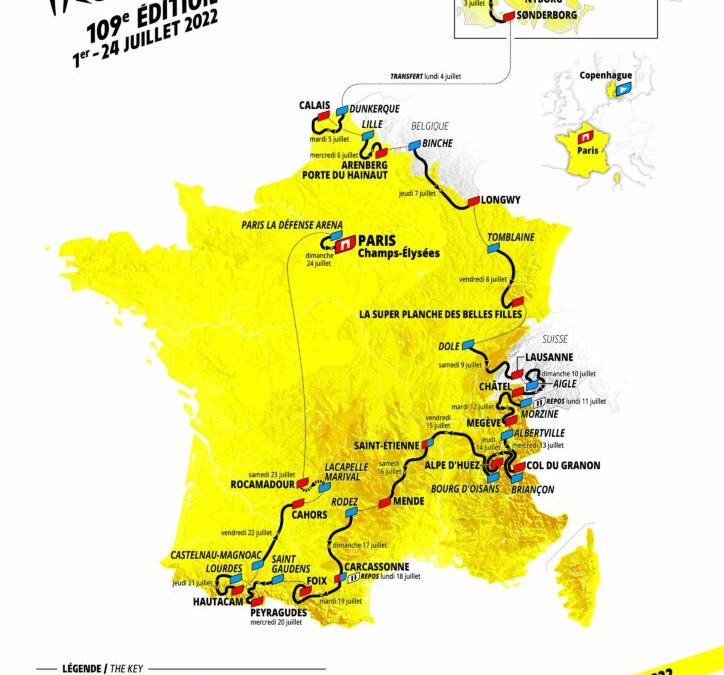 The 109th edition of the Tour de France will be held from July 1 to 24 which, after the Grand Départ in Copenhagen, its layout seems designed to encourage combativeness on all terrains.

The contenders for the final yellow jersey will enter the fray above all in mountain areas such as the Super Planche des Belles Filles in the Vosges, the Col du Granon and the Alpe d’Huez as great jewels of the alpine session, and then in the Pyrenees, in Peyragudes and Hautacam, where climbers will be able to do their chest.

The first three stages of the 2022 Tour de France route will take place in Denmark, after Brittany took over as Grand Départ in 2021 due to the withdrawal of this country due to the health situation.

In the Nordic country, the most combative against the wind will be able to shine with their own light when crossing the Baltic Sea for 18 kilometers, with a menu made up of a time trial for rollers in Copenhagen, the world capital of bicycles, and a stage for sprinters that will put the finishing touch to the northern adventure in Sønderborg.

In the North region, but already in the French region, the platoon will rediscover the French sun: on the programme, a leg-breaking journey towards Calais, a portion of cobblestones in Roubaix, a sweet treat for the attackers in Longwy and a first assault for the contenders for the title at La Planche des Belles Filles, in its “Super” version.

If the weather conditions do not decide the elimination race, the 2022 Tour will offer a prestigious stage to climbers aiming for the final victory.

In the Alps, there is a high altitude finish at 2,413 meters on the Col du Granon, on the same road where Bernard Hinault last wore the yellow jersey, back in 1986. This ascent in the Hautes-Alpes department, Reaching an altitude of 2,413 meters, it has a narrow paved road that winds steeply to the top, while dirt roads continue beyond the pass.

It was the highest mountain stage finish in Tour de France history in 1986, before the 2011 Tour saw the Col du Galibier snatch that distinction away.

The next day, an exact replica of the route from Briançon to Alpe d’Huez where the Frenchman was crowned the winner after fighting side by side with Greg LeMond. On the way to the Pyrenees, it is very likely that we will see sprints in Saint-Etienne and in Carcassonne, but not in Mende.

Afterwards we will return to the great heights to witness new skirmishes between the first blades. Tadej Pogačar could be forced to put all his meat on the grill at Peyragudes, his legs already exhausted from the climbs of Col d’Aspin and Hourquette d’Ancizan. This summit, which reaches a maximum gradient of 16%, had its most recent precedent in 2017, where Romain Bardet ended up prevailing.

The defending champion, dressed in yellow or not, will also have to deal with the ambitions of his rivals on the Hautacam road, with prior climbs to Aubisque and the unprecedented Col de Spandelles that will give no one a break. The last novelty of the route will be the final 40-kilometre time trial with the finish line at the Rocamadour promontory.

It will be time to reckon… and 24 hours later to honor a winner on the Champs-Elysées. From there, it will be the women’s platoon’s turn to make history.