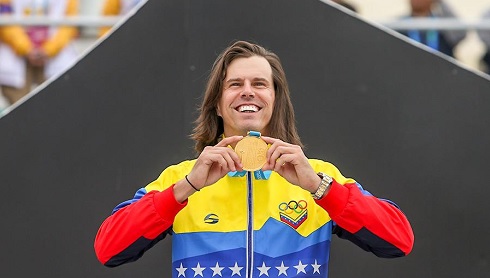 LIMA. The freestyle BMX debuted this day in a Pan American Games with golds for Daniel Dhers, of Venezuela and Hanna Roberts, of the USA, in a competition in which the favorites, professionals of the BMX world and extreme sport, did not disappoint.

Behind him was the Argentine José Torres, who had a similar behavior. Just 46 points in his first jump and a remarkable 87.17 in his second attempt.

Justin Dowell, gold in the World Cycling World Championship in the BMX mode that was played last year in China, was the most regular and scored a first jump of 84.33.

That result was by far the highest in the first round and smelled of gold, especially when he made an even better jump in his second attempt (85.17), but everything was useless in the reaction of Dhers and Torres.

In women, Roberts had no rival in his competition

It opened with an 86.67, almost 20 points above its closest pursuer.

The Chilean Macarena Pérez was in second place with a better jump of 76.67, while the Argentine Agustina Roth, gold in the Youth Games of Buenos Aires 2018 in the team mode, was in third place with 71 points. (EFE)