THE MAILLOTS TO TOUR OF SAN JUAN 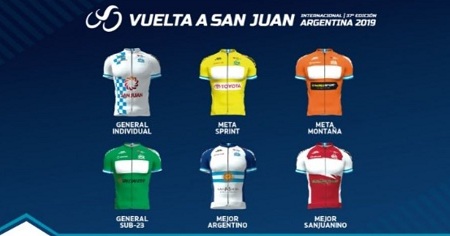 SAN JUAN, ARGENTINA. Every time less is needed for world class cyclists to travel the San Juan routes with the Vuelta a San Juan. From January 27 to February 3 will be one of the most important sporting events worldwide for Argentina. At the end of each stage of the line, the best cyclists will be awarded the different jerseys for use in the next stage and can be identified by the public that is on the edge of the Route.

The leader of the general, the best sub 23, along with the leaders of the classifiers of mountain goals and sprint goals. In addition, the tradition will be maintained and will reward the best Argentine and best San Juan in each stage, unprecedented situation for the competitions of this level.

The jersey that will identify the partial winner of the individual general classification will be base white plus some bright blue, identified with the colors of the Argentine flag. On the side of the sub 23, in the Vuelta that is coming, the leader will be dressed in a green jersey.

On the other hand and with regard to the rest of the general classifiers, the leader in the mountain goals classifier will wear an orange shirt. While that cyclist who scores the highest sprint goals in the course of the stages, he will wear a yellow jersey.

The best Argentine will identify with a white jersey with an Argentine flag that crosses the chest. While that of the best San Juan will be borravino color with white alive. Both were modified with respect to 2019.

In the previous edition of the Vuelta a San Juan Internacional, the Colombian Oscar Sevilla won the jersey, while in 2017 the Dutchman Bauke Mollema, representative of the Trek – Segafredo squad, was crowned the absolute winner of the individual classifier.

For his part, the young Colombian Egan Arley Bernal, who at that time was defending the colors of the cast of Androni Giocattoli from Italy, was the best cyclist among the sub 23 competitors who participated in 2017, while during the 2018 edition he was the Italian Filippo Ganna of the UAE Team Emirates.

In the rest of the classifiers were mostly Argentine competitors. Among the climbers, Franco López (Agrupación Virgen de Fátima) was the one who got the first place in 2017, while Daniel Juárez (Mardan) did it in 2018.

In the past two editions, the Agrupación Virgen de Fátima was able to keep the sprint goals jersey. Nicolás Naranjo obtained it in 2017, while Adrián Richeze did it in 2018.