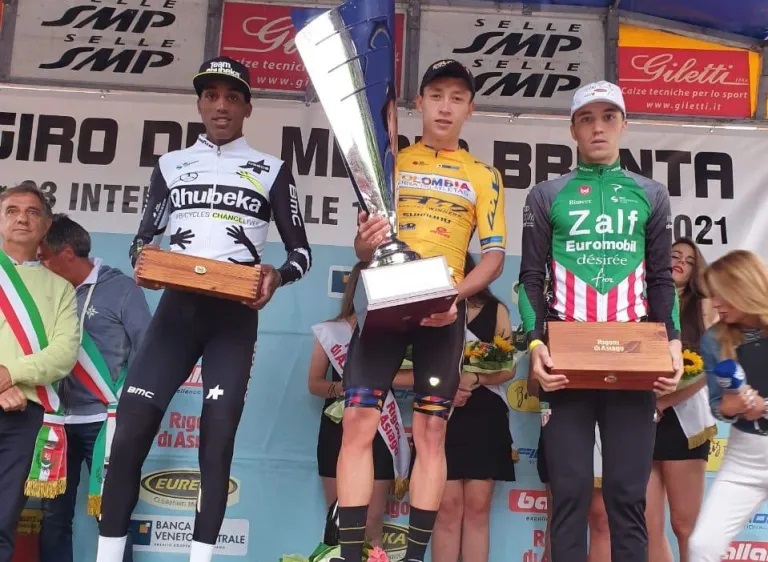 We present to you young Colombian talents, under 25 years of age, who will try to shine in the elite of Europe in the new calendar that is getting closer and closer. This list summarizes some promises to follow in the old continent during the next season.

The young promise from Tolima will debut with Gianni Savio’s Italian squad in Venezuela running the Vuelta al Táchira. Merchán, who defines himself as a great climber, stood out in the Vuelta a la Juventud and took the titles in the Giro del Medio Brenta in Italy and the Vuelta a Antioquia.

He comes to the Australian World Tour squad to occupy one of the places left by his compatriot Esteban Chaves. The two-time winner of the Tour of Youth will seek to further develop in Europe. The young rider from Zipaquirá has just completed good performances racing for Colombia Tierra de Atletas Gw Shimano. He already has experience in the Giro d’Italia under 23.

Miguel Ángel Supermán López’s brother will have his first experience in Europe after standing out with Colombia Tierra de Atletas GW Shimano in the Youth Tour. The Boyacense arrives at a new Astana project that will have an alternate continental squad with several young riders.

The young man from Boyacá was the great revelation of the last edition of the Vuelta a Colombia, by winning the queen stage in Alto de la Línea. He was running with the Caja Rural affiliate doing some races to adapt to European cycling, where he ended up convincing the Spanish with his great skills as a climber.

The current U23 national champion arrives from the Colombian continental squad Colnago CM Team. He is coming off winning a gold medal in the 2021 Junior Pan American Games in the track team pursuit event. In the road race he occupied box 18.

The Colombian sprinter, who recently made his professional debut on the Tour de Luxembourg racing for Burgos BH, will have the opportunity to demonstrate his talent for a new Spanish continental team. The sprinter from Antioquia stood out on the Spanish 2021 calendar, winning two races and one on French territory.

The young rider from Bogotá, who is doing well in the mid-mountains, will start the new experience of him surrounded by five Colombians in the Italian Pro Team squad led by Gianni Savio. This season he had the opportunity to run the ‘Baby Giro’ with the Colombia under-23 team, occupying the 55th box.

The young Colombian talent will be part of the continental team based in Spain. The current Pan American Under-23 champion arrives from the Colnago CM Team where he had an excellent season. He was sub-23 national runner-up on the road, won the Clásica Ciudad de Girardot and was also part of the Colombian team that participated in the last world championship in the sub-23 category.