The Tour de France has a new monarch: Jonas Vingegaard; Nairo hopeful for 2023 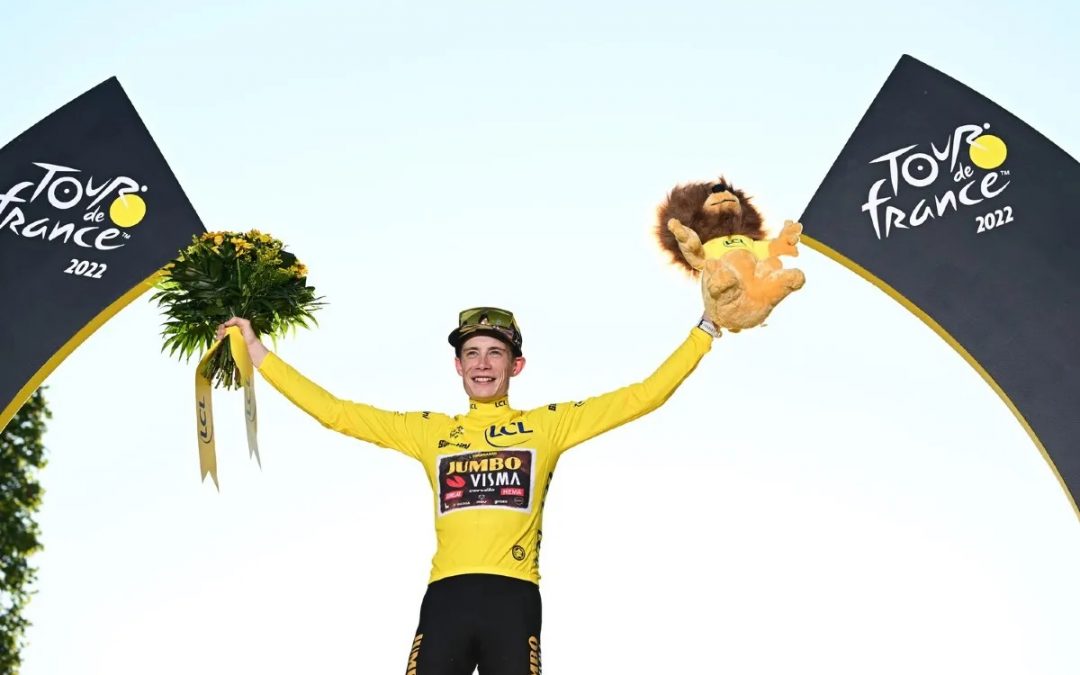 The 2022 Tour de France has a new monarch! Jumbo-Visma’s Jonas Vingegaard celebrated his first win at the ‘Grande Bouclé’ after finishing second last year. The Danish rider, who took the lead on the Col du Granon stage, crossed the finish line surrounded by his faithful squires.

The stage victory on the Champs-Élysées went to Jasper Philipsen, who clearly triumphed in the traditional triumphal ride on the Champs-Élysées, after covering 115.6 kilometres. The Belgian won in the French capital ahead of the Dutch Dylan Groenewegen (BikeExchange-Jayco) and Alexander Kristoff (Intermarché Wanty Gobert Matériaux).

As for the final general, Jonas Vingegaard climbed to the top of the podium, accompanied by the Slovenian Tadej Pogacar (UAE Team Emirates), who was second and the Welshman Geraint Thomas (Ineos Grenadiers), third.

As usual, the first half featured the well-known protocol scenes, photo opportunities and the unforgettable champagne moment with the Jumbo-Visma riders.

As they approached the Champs-Élysées, Sepp Kuss and Tiesj Benoot picked up the pace a bit. Later Jonas Rutsch together with Jan Tratnik tried to surprise the pack, but they couldn’t get away. Then Nils Politt, Krists Neilands, Benoît Cosnefroy and Pierre Latour also wanted to leave, however they were unsuccessful.

With the sprint teams taking control, Colombian Daniel Felipe Martinez jumped out of the pack with Stefan Bissegger, Stan Dewulf, Jan Tratnik, Mathieu Burgaudeau and Matteo Jorgenson, but they were quickly overwhelmed by the main pack.

In the final section there was an acceleration by Tadej Pogacar, Geraint Thomas and Filippo Ganna, promptly answered by the sprinters’ trains. Immediately, the teams interested in the stage reported for the last three kilometers. With the absence of the Jumbo-Visma on the front; the yellow jersey, the green jersey and the three remaining teammates gathered at the bottom to cross the finish line together and without hurry.

In the end it was all for the sprint, where the BikeExchange-Jayco took the initiative, taking Dylan Groenewegen to the first places, but the Dutchman took the lead too soon and in the final meters Jasper Philipsen easily overtook him.

The story did not end for Nairo Quintana with sixth place in the Tour de France. The Colombian rider was satisfied with that position in this year’s edition and assured that he once again had sensations that make him think that he can once again fight for the podium.

“I finished in the top ten of the fastest Tour in history. That’s very positive. I’m satisfied,” said the Colombian from Arkea, who lost a place in the general classification in the last time trial and finished sixth.

His performance makes him forget the last two editions, when injuries and physical problems separated him from the fight among the best. “It had been years since I had been so close, breathing near the podium, this year I was able to do it,” said Quintana, who revealed that in the Foix hotel the temperature changes linked to the air conditioning created respiratory problems that he felt in the last week.

The boyacense said he felt “rejuvenated” in a team with younger teammates, to whom he wanted to contribute his experience.

“I don’t have domestiques like other teams, half of my teammates made their debut in the Tour and many others ran the second. But we have been learning,” he said, convinced that now he will do a good Vuelta a España and next year he will fight again for the podium in Paris and fight in stages.

Quintana indicated that his renewal by the Arkea team is on the right track. “They are in negotiations, it is a team that has shaken my hand, we have felt very good, we have combined well. The first years were those of covid and injuries, they were difficult, it was difficult to adapt,” he acknowledged.

“But now we’re getting results and we’re all happy. In all the races I’ve run I’ve finished in the top 10. We’ve done good things. Now reinforcements are coming to the team and I think I’ll stay here,” he said.