The Tour of Venezuela will start in Puerto Ordaz 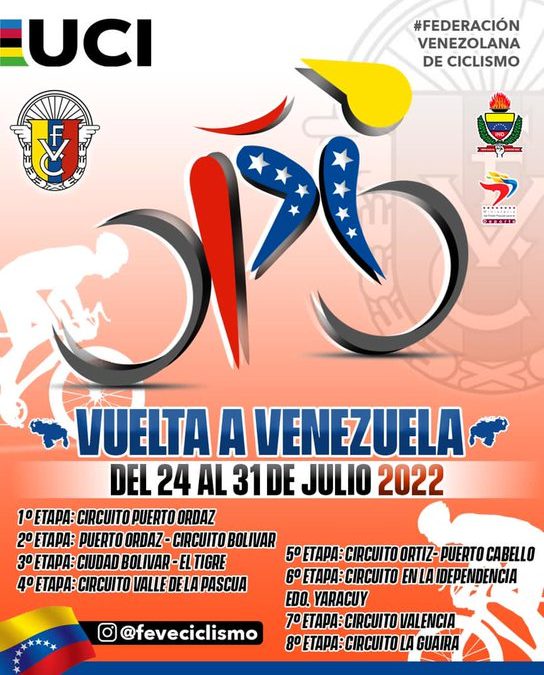 With a route of 1,084 kilometers, divided into eight stages, the 59th Edition of the Vuelta Ciclista a Venezuela will be held from the 24th to the 31st of this month, the Venezuelan Cycling Federation reported in its most recent press release.

In the traditional race, registered in the 2022 calendar of the International Cycling Union (UCI), category 2.2 test, the Nicolás Maduro Moro Cup, President of the Bolivarian Republic of Venezuela, will be held as a novelty.

The sprinters will have a feast because in each stage four sprints will be at stake, two bonus and two for points. In total, the Vuelta will have 32 intermediate finishes in the eight projected sections.

The first stage will take place on the 24th of this month with a circuit in Puerto Ordaz, Bolívar state, of 120 kilometers.

The second section, to be run on July 25, will consist of 113.2 kilometers between San Félix and Ciudad Bolívar.

The third route, to be held on the 26th, will be between Ciudad Bolívar and El Tigre with a section of 153.3 kilometers.

In the fourth stage, on July 27, the riders will have to stretch their legs in a circuit in Valle La Pascua, Guárico state, of 137.7 kilometers.

The sixth stage includes 131.4 kilometers in a circuit of San Felipe, capital of Yaracuy.

The seventh rung will take place on July 30 on a 125.8-kilometre circuit in Valencia.

The eighth and final stage will take place on July 31 and includes a 100-kilometer circuit in La Guaira.