The Venezuelan Yurgen Ramírez goes to the Vigo-Rías Baixas club 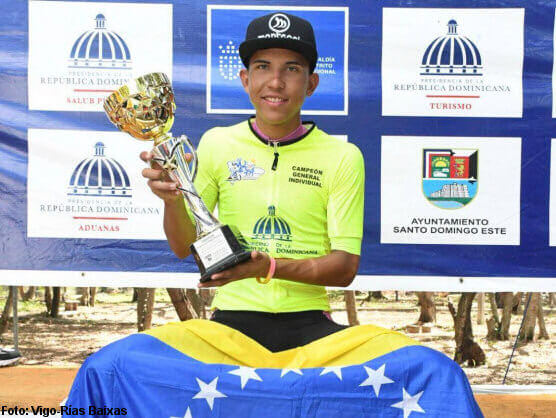 The Venezuelan Yurgen Ramírez, a climber used to competing in the professional peloton, will wear the shirt of the Spanish club Vigo-Rías Baixas and thus becomes the third signing of the structure chaired by José Luis Chamorro for the 2022 season.

The 23-year-old runner from the state of Táchira has achieved three wins over the past season. Winner last February of a stage and the general of the Independence Tour of the Dominican Republic, a category 2.2 race on the calendar of the International Cycling Union (UCI), he also climbed to the top of the podium in Spain.

Ramírez won at the end of May on the second day of the Vuelta a Alicante, wearing the colors of the Manuela Fundación, an elite-sub 23 team to which he has belonged during 2021.

`El Makancan´, as he is known in his country, is a regular in the plans of his national team and before traveling to Europe to enlist in the ranks of Vigo-Rías Baixas he will defend the colors of Venezuela in the Vuelta a San Juan, from January 30 to February 6.

This round that takes place in Argentina is the most important event of the year in cycling in South America. Catalolgada of class 2.1 by the UCI, this year it will count among other World Tour teams with the presence of Ineos.

Ramírez is in his hometown training intensely to prepare for his explosive start to the year. “I am very happy for the opportunity that Vigo-Rías Baixas offers me. It will be my third experience in Spain. I know it is a very competitive team,” said the Venezuelan who defines himself as a runner that “I have always had a winning mentality. “

The preparation that he is following and his participation in the Vuelta a San Juan hopes that they will grant him an optimal point for the Spanish Cup, one of his great objectives in 2022.

“I will go with everything, to give my best and to help the team. I am always willing to give more than 100% in favor of my teammates. Whoever wins, as long as it is a Vigo-Rías Baixas, we will all be happy, “says Ramírez.

This incorporation joins those of juniors Martín Rey and Joao Leite. Before the end of the year, the fluorine group plans to announce more reinforcements for its new project.