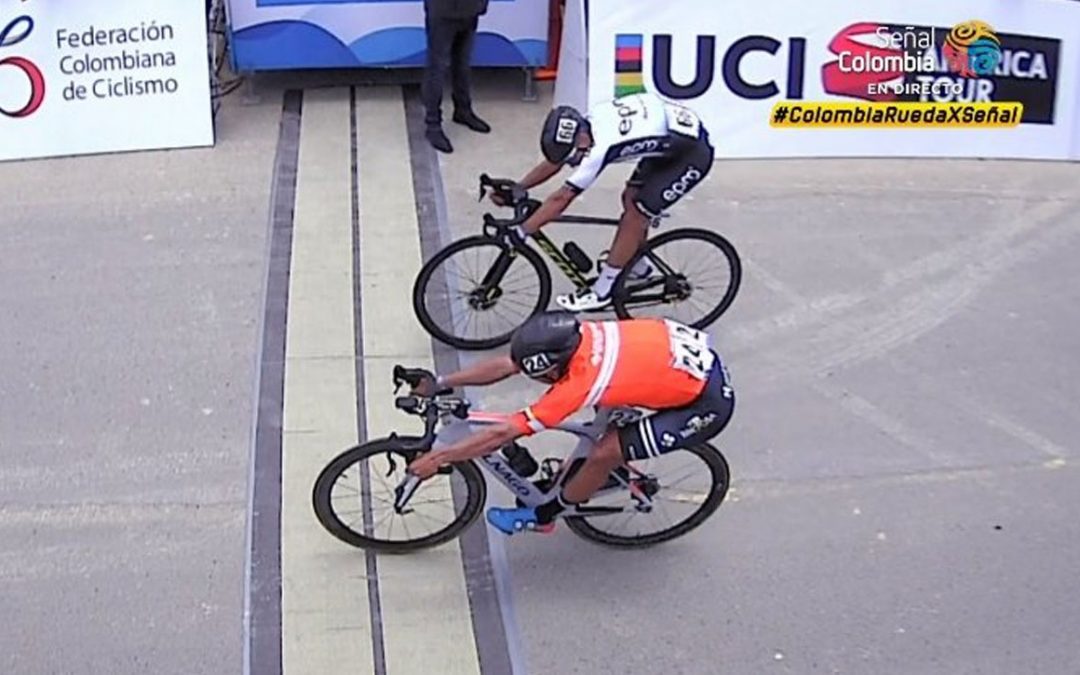 A definitive sprint was lived this Sunday, April 18 at the end of the second stage of the Vuelta a Colombia Mindeporte 2021, because not only did Luis Carlos Chía be the winner of the fraction, but he also moved the general classification and left Bryan Gómez as the new leader of the race.

164 runners started the third day of competitions of this 71st edition of the Vuelta in the Boyacá municipality of Paipa, where they undertook the 181.1 kilometer route that would take them to the town of Tocancipá in the department of Cundinamarca.

From the first kilometers, which were held under the cold Boyacá temperature, the runners were active, wanting to put a strong rhythm to the race, for which there were several escape attempts, which were unsuccessful due to the pace he was driving. the platoon.

However, three runners tried, started from the main group and went on to command the race: Hernán Darío Gómez (Esteban Chaves Foundation), Dubán Bobadilla (Herrera Sport) and José Serpa (Team Cartagena), were the adventurers who managed to make a difference to the lot.

After the triplet consolidated the break, some runners started after them to join the lead, but the race leader had a good rhythm and they did not give a chance for the pursuers to connect.

This top group played the first two intermediate prizes. The first sprint went to Serpa, who crossed first than Gómez and Bobadilla. Later, Bobadilla won the first mountain prize, where Gómez was second and Serpa, third. After this port, Dubán was left alone at the top, but later his fellow adventurers rejoined the head of the race and, in addition, Juan Diego Hoyos (Colnago), Steven Cuesta (Sundark), Pedro Herrera (EBSA), Elkin Malaver (Bicistrongman), Jordan Rodríguez (Movistar Ecuador) and Yesid Sierra (Nectar), who formed the escape of nine runners, who later remained only eight, as Sierra was left behind after a mechanical problem.

The leaders reached a difference of 2 minutes and 20 seconds with the main group and played other intermediate prizes, such as the second mountain prize, where Bobadilla again added in first place, followed by Malaver and Rodríguez. The leading group was discounting the difference and before the second special sprint they hit the escapees.

Pedro Herrera wanted more and went to the fore again, this time alone, staying with the second sprint, where Nelson Soto (Colombia Tierra de Atletas) and Steven Cuesta, crossed second and third, respectively. In addition, he won again in the third and last sprint of the day. Oscar Quiroz (Colombia Land of Athletes) and Juan Diego Hoyos crossed after him.

In the ascent to the third and last mountain pass of this day, the group neutralized Herrera, but immediately Salvador Moreno (Orgullo Paisa), Óscar Pachón (Sundark) and Albeiro Pira (Mayor of La Vega) left, who took a brief difference to favor. Pira won the Alto del Sisga, leaving Moreno, second and Pachón, third. The latter stayed behind until he was connected to the group, which tightened the rhythm and also ended the adventure of the two who remained at the top just 10 kilometers from the finish line.

The last kilometers were contested with the compact group, several teams, interested in the stage, began to place their chips forward to dispute the packaging. Colnago, EPM, Supergiros, Soñando Colombia, Canels, Colombia Tierra de Atletas and Team Cartagena, were some of those who moved their specialist runners in these auctions for the fight for victory.

At the end, the fastest in the sentence line was Luis Carlos Chía from Cundinamarqués, who beat Diego Ochoa (EPM-Scott) from Boyacá and Bryan Gómez (Supergiros) from Valle del Cauca, who added 4 seconds in the third place bonus. and rose to first place in the general classification, assuming the leadership of the race.

The third online stage of the Vuelta a Colombia UCI 2.2. 2021 will be held this Monday, from 7:50 p.m., between Mosquera (Cundinamarca) and the city of Ibagué (Tolima), on a 181.1 kilometer track with two mountain prizes and three special sprints in dispute. A day that can also be seen, from 10:30 a.m., on Channel RCN, Win Sport and Signal Colombia.