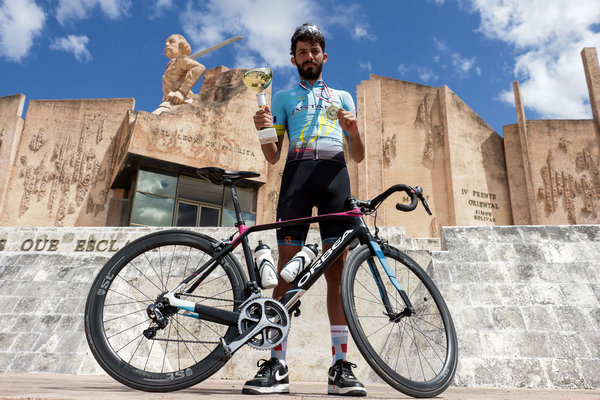 Las Tunas.- Juan Manuel Cabrera, from Sancti Spiritus who ran through the Cienfuegos Technical Center, became the champion of the Tour of Cuba in the eastern zone, which concluded this Sunday with the fifth stage between Holguín and this city in a splendid and flat working day.

The 99.7 km section was dominated from start to finish by Kevin Vega from Havana, from the National Team (EN), who broke away from the peloton at the exit of Holguín along with Hidalgo Vera from Guantanamo and Mario Couso from Santiago, and they crossed in that same order. for the flying goals in Buenaventura (km 40), Las Parras (km 50) and Calixto García (km 67).

At the final line, located in the Plaza de la Revolución Vicente García where they circled the circuit of almost 1.5 km, Kevin stopped the clocks at 1:52.39 hours, escorted by Vera and the young spiker from Sancti Spiritus Andy Díaz (EN), who It rolled in the main “ball” and already in the last moments it reached the fugitives.

Juan Manuel defended his privileged position from the fourth stage, without letting the closest pursuers discount him any advantage and by entering with his leading peloton he definitively assured his victory with a total record of 13 hours, 8 minutes and 58 seconds. .

He still preserved his condition as subtitler for Yariel de León from Matanzas, despite suffering an early fall that required a change of machine. By regulation they advanced him to the leading group where he was shooting, he continued with his characteristic combativeness and was only three seconds behind the champion.

For his part, Yoandry Freire, who ran through Ciego de Ávila, knew how to take advantage of his experience and preparation during the recent Escambray Mountain Bike Challenger that he dominated and took the trophy for third place to his province of Sancti Spiritus, at 1.42 minutes from Cabrera.

The classification of Metas Volantes was assured by the experienced Cuban boxer, Leandro Marcos (EN), from Havana, despite not obtaining points this Sunday, since the 18 accumulated up to the fourth stage were enough.

Second place went to Luis Ramírez, from the Granma team, with 13 units, and third place was achieved by Kevin Vega with 12 thanks to his victories today in the three arranged on this date. The winner among the under-23 runners was Javier Cabrera from Pinar del Río, from the national team in that category.

The next turn will be in the central zone from April 13 to 17, which includes the provinces of Camagüey, Ciego de Ávila, Sancti Spíritus, Villa Clara and Cienfuegos.