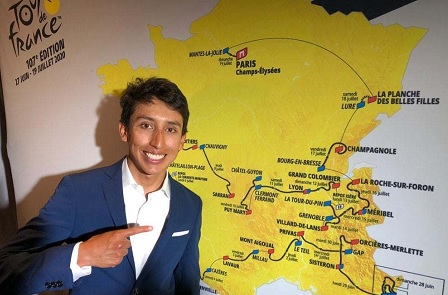 BOGOTÁ. The profile of the paths of the 107th edition of the Tour de France once again emphasizes the mountain, and unlike the great laps of recent years, the time trial will be a decisive factor but not precisely a long and flat stretch for specialists. The design of the 36 kilometers of the penultimate stage will decide the title in favor of the world’s most experienced climbers in the Planche des Belles Filles.

The test that will start in Nice on June 27 next year, accumulates a total of 3470 kilometers, four high end, eight mountain stages and a day of time trial before the traditional walk of victory over the Champs Elysées, in Paris.

One of the substantial novelties of the organization was the inclusion of the Col de la Loze, unpublished for the Tour of Professionals, but already explored by the U23s in the last edition of the Tour de L’Avenir. It is a colossus located in the Alpine station of Méribel, which ascends to 2305 meters above sea level with ramps of up to 25% in its demanding seven kilometers.

From its base, the port covers 18 kilometers with roadside indications that indicate the exact slope with a countdown of the advanced distance per kilometer. The final section is a narrow new road that leads to the ski resort surrounded by a splendid panorama, but of great difficulty due to the wind and the strong inclinations. The ascent will be made on Wednesday, June 15, after passing through the Col de la Madelaine.

“There will be 29 mountain prizes, one less than those initially planned for the 2019 Tour. The Tour continues its renovation. Next year the longest stage will be 218 kilometers. Never has a queen day been so short, ”said the director, Christian Prudohome.

Egan Bernal, current champion of the ‘Grand Bouclé’ was one of the special guests at the gala with his partner Chris Froome, the French Julian Alaphilippe, Thibaut Pinot, Romain Bardet and Warren Barguil; and the Australian Caleb Ewan, representative of the sprinters.

«It seems that the Tour is good for me, but before knowing the tour, the idea was to wait and see the tour of the Tour. It is a decision that is not taken lightly. I cannot arrive and say ‘I will be on the Tour team’. We are a team and we have to find a way to distribute the races, depending on which race is best for each runner, ”said Bernal. (Fedeciclismo Colombia)