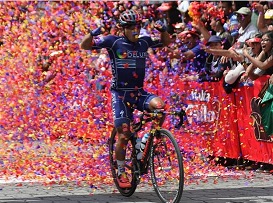 GUATEMALA CITY. The Guatemalan José Canastuj, better known as “el Torito”, beat the Colombian George Tibaquira on Tuesday and won the seventh stage of the Tour of Guatemala, where Manuel Rodas is still the leader.

After disputing the 116 kilometers of the Palo Gordo Esquipulas circuit to San Marcos, Canastuj, he won the stage with a time of 3 hours 10 minutes and 45 seconds, followed by Tibaquira and Nervin Jiatz, second and third, respectively.

The curious and funny picture of the day came on the same podium, when the leader of the seventh stage received a rooster from an amateur as a prize for his victory with his legs tied that sought to get rid of the cyclist’s arms.

During the tour three flying goals and three mountain awards were played. The Peruvian Alonso Gamero won the first goal and starred with the Guatemalan Brayan Ríos, crossing the second goal in the same order. The third was won by Colombian Steven Cuesta.

Gamero won the first and second prize in the mountains, while the third fell on the legs of Colombian Cristian Cubides. Manuel Rodas, despite the fall, continues to lead the general.

The eighth stage, of 121 kilometers, will be played this Wednesday from Momostenango to Piedra María, in Tecún. (EFE)